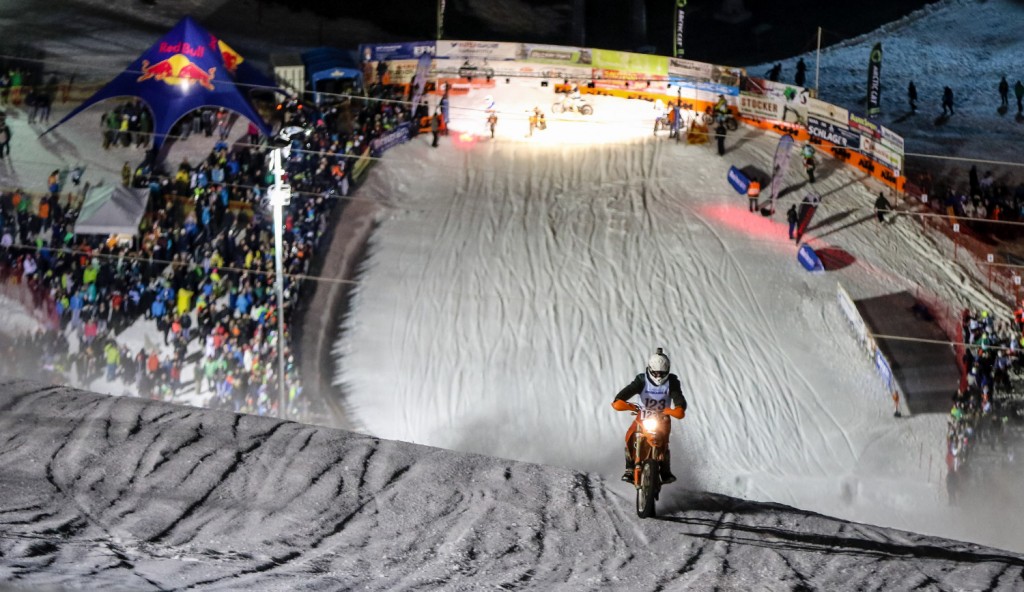 It’s an unbelievable spectacle, this Snow Speed Hill Race in Pichl, in the Styria region of Austria: 170 competitors tear up the ski piste at Reiteralm on motorcycles and snowmobiles. Winter sports holidaymakers are rubbing their eyes in disbelief at this crazy carry-on as they sip their après-ski drinks. It was just a pity that this time one of the favorites was forced to be a spectator. 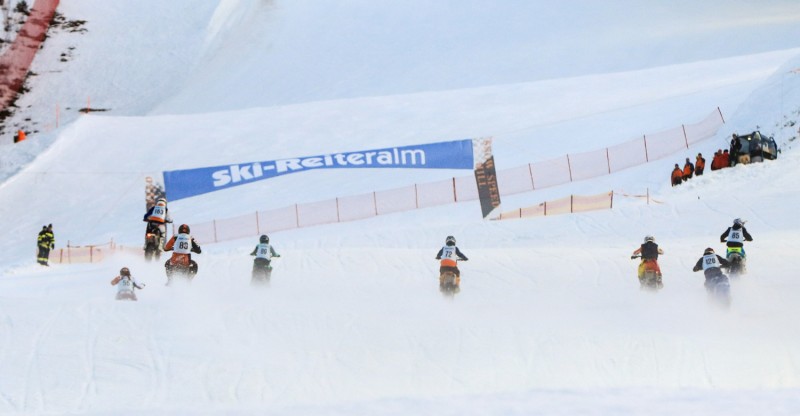 He would have so loved to be taking part. But now he finds himself sitting on a folding chair right next to the starting gate with his injured left leg propped on a crutch: meet Matthias Walkner, the KTM factory rider in the Cross-Country Rallies World Championship, who has been on the injury list since a crash in the Dakar. Walkner has already won the Snow Speed Hill Race once, and another time he came in second. This time he can do no more than look on. For a racer like Walkner this hurts every bit as much as his broken thigh. At least the guys from the organizers, MSC Reiteralm, have set up this box seat for the convalescing star right next to the starting gate, giving Walkner the best view of the action.

“Of course I would have preferred to be riding,” says Walkner. After all, the Snow Speed Hill Race is something really special. “However,” adds Walkner, “just a few more weeks now till I can get back on a motorcycle again.” 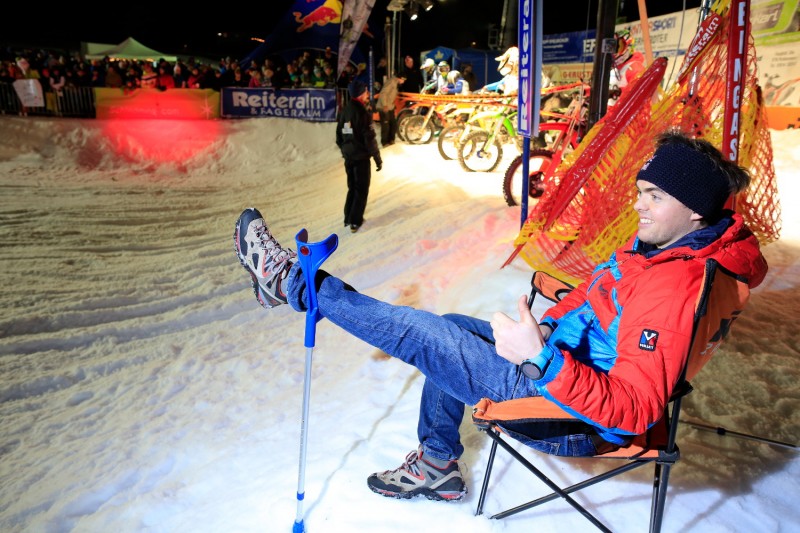 He says that next year he wants to compete in this event come what may. He has already been in consultation with his KTM engineers at the factory in Mattighofen, and they agreed that Walkner should take on next year’s Snow Speed Hill Race on his KTM 450 RALLY from the World Championships. But has he any realistic chance of winning on the heavy KTM Rally machine? “Strip it back to save weight, increase the compression ratio, lower the gear ratio, that will do it,” says Walkner.

The Snow Speed Hill Race is a truly bizarre event. If not for the fact that the term is so hackneyed, you might even describe it as a cult event. The piste is 550 meters long, has a maximum gradient of 40 percent and is officially named: Grande Finale. Two days ago the skiing star Marcel Hirscher was on the Grande Finale. For the leading competitors in the overall World Cup it is the ideal training slope. But should motorcycles really be ridden up the same slope that Hirscher arrows down on his skis? Most definitely, yes, it’s a winner! At least it is for most of the competitors. 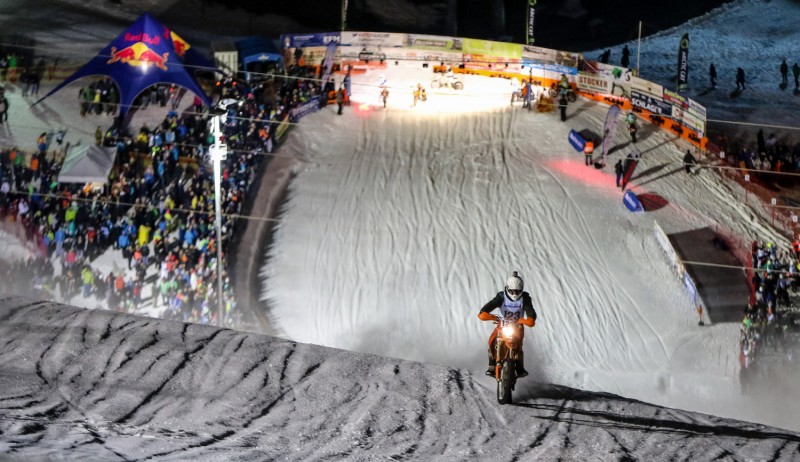 The racing follows a simple pattern: seven competitors line up alongside one another as in motocross, and when the starter’s tape is yanked up they tear off straight ahead up the mountain. But not all of the riders make it to the finish. In most of the heats one or two of the machines come to a halt before they get there. If the rear wheel runs out of traction, the bike wobbles and loses too much momentum, and that’s that. The fallers are cleared off the piste ready for the next heat to start. And so it carries on, with heats and repechages all leading towards the final. The first three always progress to the next round. The whole event is fast and furious. Once every minute the starter’s tape is yanked up, ensuring non-stop action. The spectators on the edge of the piste are splendidly entertained. If it gets too cold outside, spectators can enjoy the spectacle from the “Kuhstall” (the cowshed), which is the après-ski marquee near the valley station. With a Schladminger Sepp (beer) or a “Willi” (a type of fruit brandy) in your hand it’s really quite a pleasant place to watch the proceedings from. 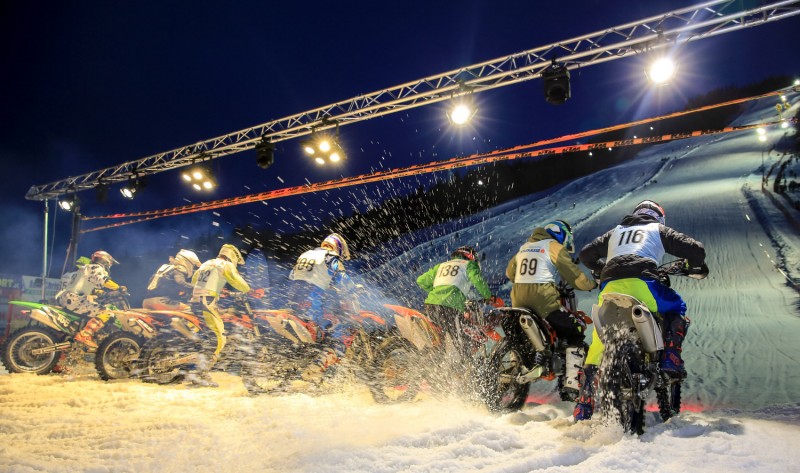 The secret of success in the Snow Speed Hill Race is choosing the right uphill line. Should you opt for the left as you did last year? Or, since the snow is hard and icy, is the track on the extreme right a better option? This is what you’ll be aiming to find out during the practice runs. But a word of caution: the line that was fastest in practice in the late afternoon can suddenly cease to be fast four hours later in the final. The piste is constantly changing.

Word gets around between the riders about which line offers the best grip, which in the past has led to some pretty volatile discussions. If the right side of the piste was faster, everyone wanted to start on the right. Taking up position prior to the start used to turn into a race before the race with all manner of pushing and jostling. That’s why at MSC Reiteralm they came up with the idea of using counters: before each heat the riders have to turn over a little wooden counter; the underside of the counter shows the number of their starting position. As a general principle at MSC Reiteralm they prefer simple solutions. Electronic timekeeping? Never again! “We tried three times to use a computer to record the results and rankings, and it never worked” explains Günther Breitfuss, Vice President of MSC Reiteralm. So Breitfuss and co. went back to the old-school principle, which means that everything is done manually. The finish-line judges simply use the naked eye to determine the finishing order. And the MSC race director, Marlene Schaumberger, uses a six-meter wide wooden board to direct the event. For each rider there is a little tablet that bears their name. If the rider finishes as one of the first three, then their tablet is moved on into the next round. Primitive, but it works. 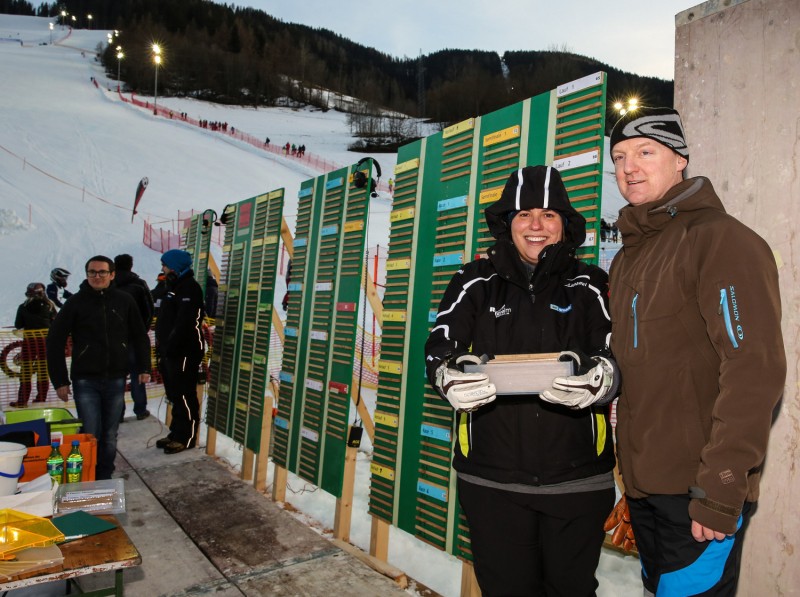 The Snow Speed Hill Race was first conceived around 2003. Günther Breitfuss and his Styrian mates, every single one of whom was mad on motorcycles, liked tearing up the Reiteralm ski piste after they had knocked off work for the day. Up to the Gaudi. The skiers, of course, stood around and looked on in astonishment. “What? You’re riding up that?” And so Breitfuss and his pals decided that since people get so fired up about it, they would hold a proper race. No sooner said than done. The first Snow Speed Hill Race was held in 2006.

The event was a resounding success. Since then, its popularity has increased to the point where anyone who is granted a place on the starting line can count themselves lucky. There were almost 600 riders wanting to register for the event in 2016. Registration was thrown open at 9 a.m. on January 13 on the MSC Reiteralm website, and within five minutes all the motorcycle starting places had been allocated. Needless to say, the server couldn’t cope with the avalanche of applications. Also needless to say, a man with a reputation like Matthias Walkner can bypass the registration procedure that is there for ordinary mortals. If he wants to compete again in 2017, he is in!

Meanwhile, the finals are in full swing on the Reiteralm and Matthias Walkner, sitting on his folding chair near the start gate, finds himself very much sought after as an interviewee. By competitors, fans and journalists. Let’s ask the KTM factory rider: what is the best design for a motorcycle for the Snow Speed Hill Race? “Plenty of power but nice and light,” says Walkner. An ideal event for motocross bikes. And, what’s more, without any exotic modifications such as extremely long rear swingarms which can often be seen in the hill-climb races in summer. That would add too much weight. Any other technical tips? “Not much air in your tires; that will give you more grip. And set the bike lower at the front.” And then he lets something else slip, which sounds like “Antifreeze in the rear tire”. What was that? “Yes, well”, says Walkner, giving the impression that he has maybe given a bit too much away.

Key word: rear tire. Studded tires are strictly forbidden. That’s why the rubber compound should be as soft as possible, and the tires also need deep treads. What’s more, the profile edges must be razor-sharp. Anyone turning up with a worn tire has lost the race already. Hard-core Reiteralm riders turn their rear tire round on the rim before the final. With overall victory in mind, the aim is to achieve better forward thrust from the profile edges that have so far been spared and remain sharp. Some riders even fit a fresh tire for the final. 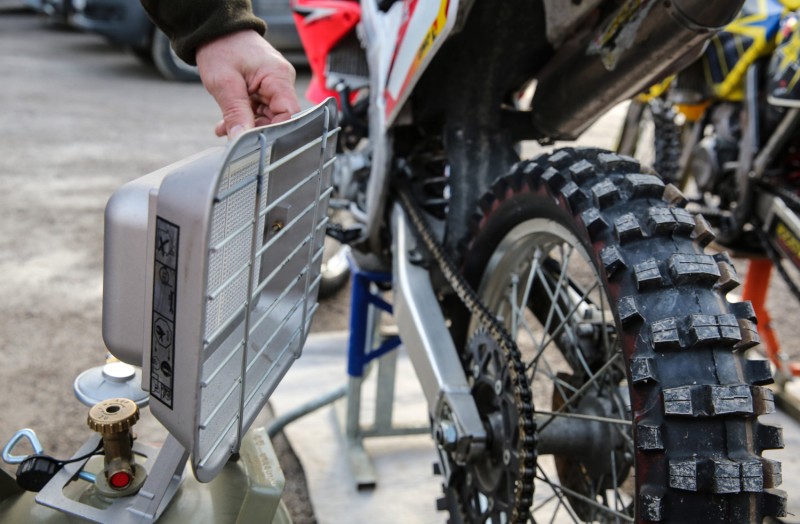 Now it is just before 10 in the evening and the 2016 final of the large-bike class (over 250 cc) in the Snow Speed Hill Race is about to start. Because a certain Matthias Walkner has been forced into the role of onlooker, another young gun from KTM steps into the breach. Daniel Stocker, a mountain farmer from neighboring Schladming, forces his way past his opponents in the final few meters and wins. Stocker once rode for KTM at the Enduro World Championships, he also took part in the SIX DAYS race, and now he has added a further triumph to his Snow Speed Hill Race victories in previous years. For the final, Stocker decides on the line on the far right-hand side next to the course barrier. The right-hand side was the faster side in 2016 – as Matthias Walkner himself realized long ago. 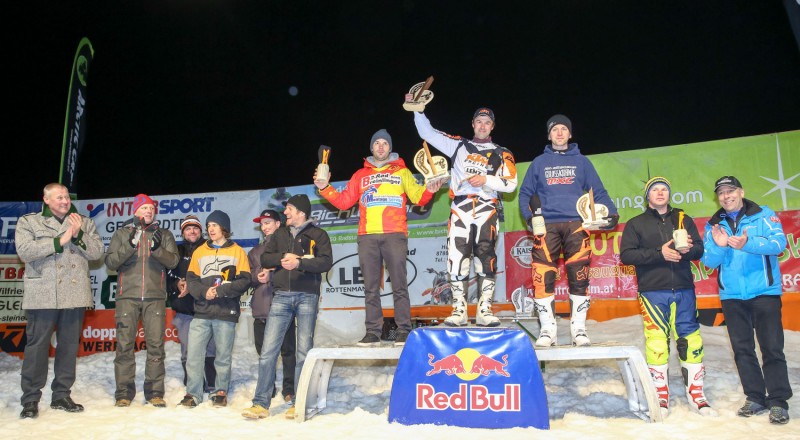 But Walkner is now already thinking about a time some weeks in the future. He is hoping to be back in the saddle in time for the Sardinia Rally at the beginning of June. That was where he had his first win in a World Championship Rally event one year ago. Although he really can’t wait to make his comeback in the World Championships, he has also already inked the Snow Speed Hill Race into his diary for 2017.