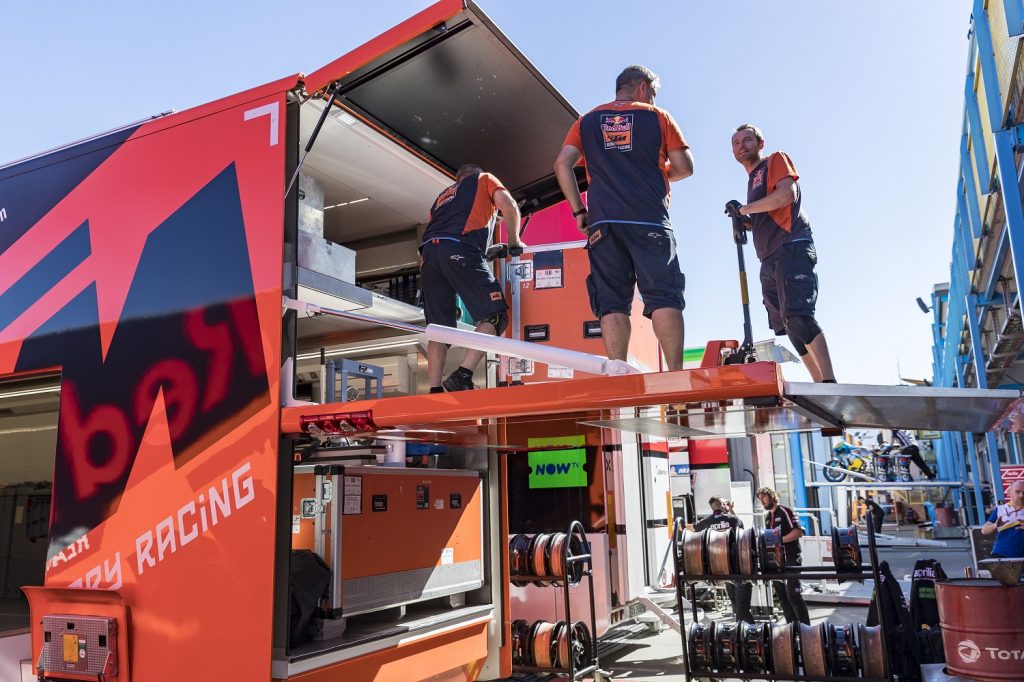 The next time you turn on the TV to watch a MotoGPTM race, take time to appreciate the complex logistics operation that goes on behind the scenes. It’s more than just getting a few motorbikes from one circuit to the other. To find out the full story, we decided to dig a little deeper. 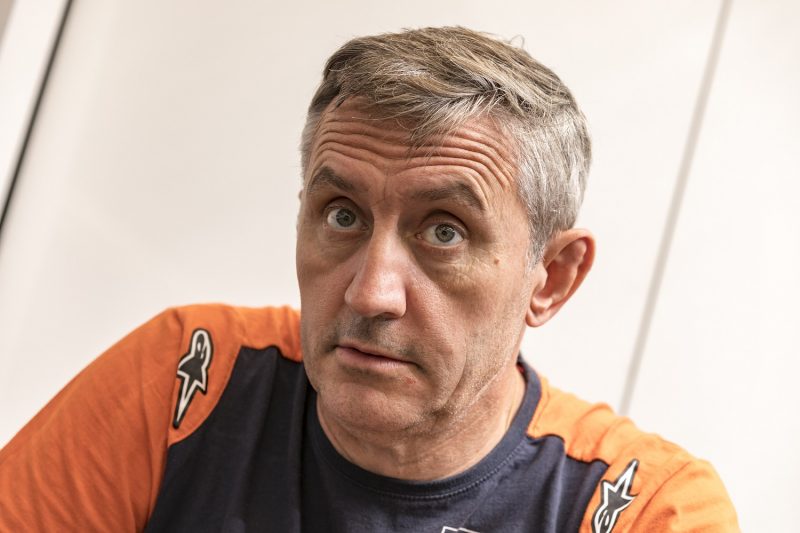 Meet Jeremy Wilson, logistics coordinator at Red Bull KTM Factory Racing. Originally from Driffield in England, Wilson is now a long-time resident of the MotoGPTM ‘village’, with no less than 23 seasons in the paddock. And although he has been a part of the promising Red Bull KTM MotoGP team ever since its inception, this is only his first season as logistics coordinator. In fact, Wilson was rather shocked when he was offered the job of logistics coordinator for the team. “I’ve got plenty of experience, including time with Red Bull Yamaha, WCM, and Rizla Suzuki. You could say I’m a jack of all trades, I can do all kinds of odd jobs. It started like that at KTM too. When I got here, I used to drive one of the trucks to the circuits and take care of the tires for Pol Espargaró. Then out of the blue, Mike Leitner (KTM’s MotoGP team manager), called me into his office. I thought to myself, “what have I done wrong now?” But to my surprise, without warning, he asked me if I wanted to be a logistics coordinator. I thought, “is he joking?” But no, he was dead serious. I was lost for words, because I really didn’t see it coming.”

Wilson was surprised for two reasons: firstly, he’s not exactly great with computers, and secondly, he speaks English with a very strong accent. “English people are very lazy when it comes to learning other languages”, the 51-year-old Englishman readily admits. “I try to talk with less of an accent now, and I’ve been brushing up on my computer skills as well. I still type with two fingers, but I’m gradually getting better at using a laptop. Needless to say, I do much of my work the old-fashioned way … with a pen and paper. Basically, my notebook is my computer. I write down all my tasks, and then cross them off when they’re done.” 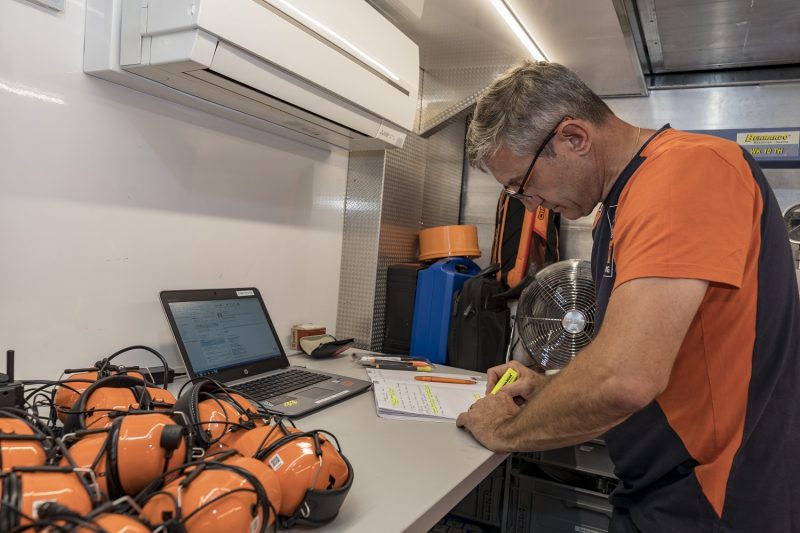 No worries
Through a combination of Wilson’s experience and some outside help, there have been no logistical disasters for KTM this year. With his tireless commitment and willingness to learn, he tries to make the logistics operation as smooth as possible. Luckily, he has two other logistical coordinators to help him out. Wilson is mainly responsible for the trucks and the pit boxes, while his colleague Beatrice Garcia takes care of the people side of the operations. In other words, she makes sure all the team members have got a place to sleep and catch their planes on time. Then there is Thomas Rockenmeyer, who handles the logistics for the spare parts.

Jeremy Wilson always gets to the circuit early because he still drives one of the three trucks. Despite being a coordinator, driving a MAN truck is still a part of the job. “On race weekends, to make sure the logistics go smoothly, I like to be the first one there. There might be urgent deliveries, for example, that need to be taken care of as soon as they come in. So, it makes sense to drive the truck as well. That way I know everything will get to the circuit on time.” Race weekends for Wilson start at 14.00 hours on Tuesday afternoon. “It’s a very strict rule of the organization. Everyone has to line up outside the circuit, and then they let us in one-by-one and escort us to our assigned location. We wash the trucks on Tuesday evening so that everything is ready when the pit boxes are built on Wednesday morning.” After the trucks have been unloaded, the whole team gets to work to transform the pit box into KTM’s command center for the weekend. The walls go up, the motorbikes are rolled in, and the tools are laid out in exactly the right place. Everything has to be perfect, so the mechanics and engineers can just walk in and start work straightaway. Thursday afternoon is when Wilson has to take out his laptop and touch base with everyone back at headquarters and make the final arrangements with partner companies like DHL, a key logistical partner of the team. This English member of the KTM MotoGP team has to make sure everything runs smoothly throughout the entire weekend. If anybody needs anything that involves logistics, then Wilson is ready to work out an effective plan. On top of that, he has to be on stand-by next to the track, on a scooter, during the MotoGPTM training sessions. He usually goes to a spot where the riders are most likely to fall off. “Then Pol or Bradley can just jump on and I can get them back to the pit box as quickly as possible.” 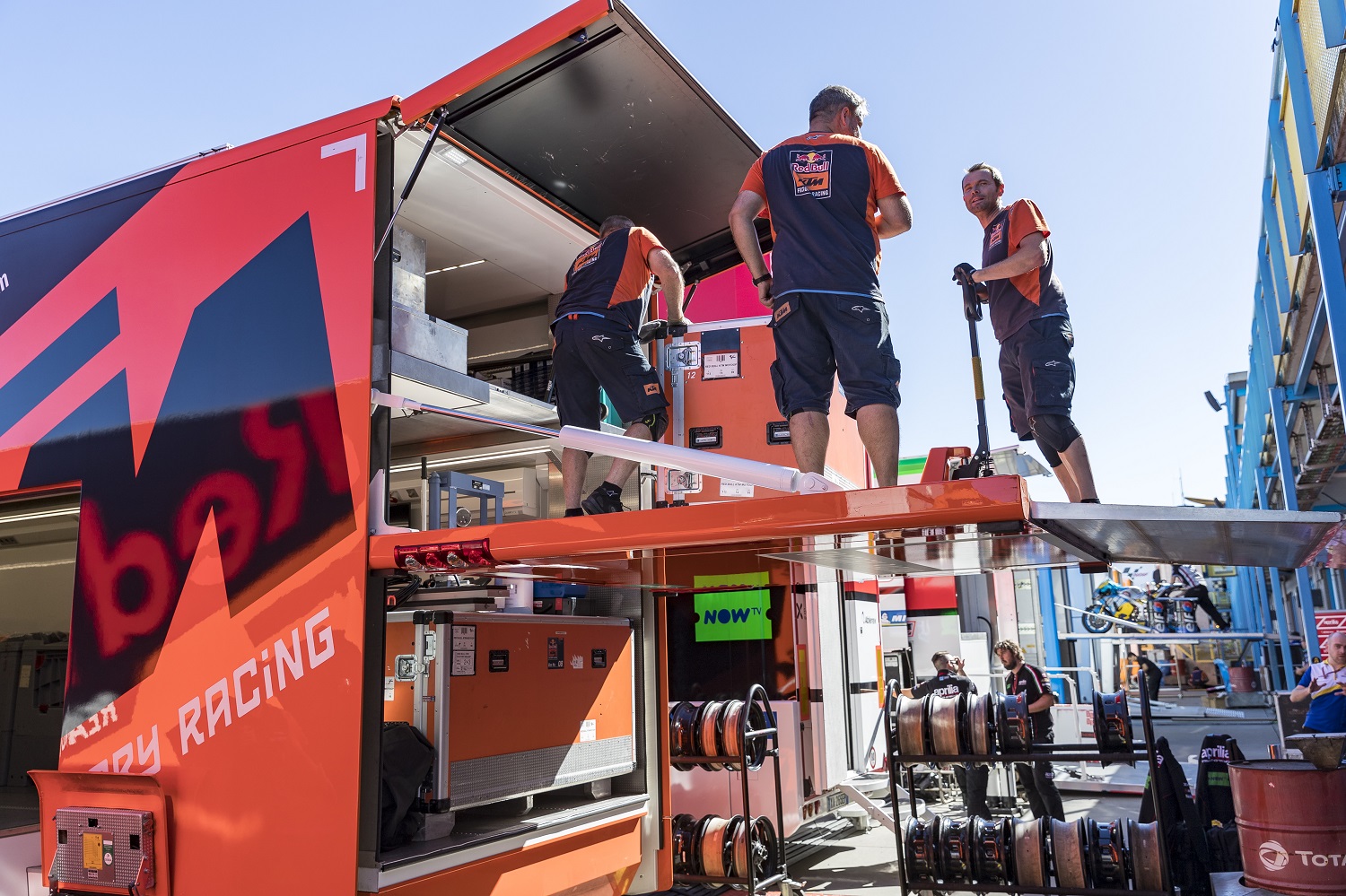 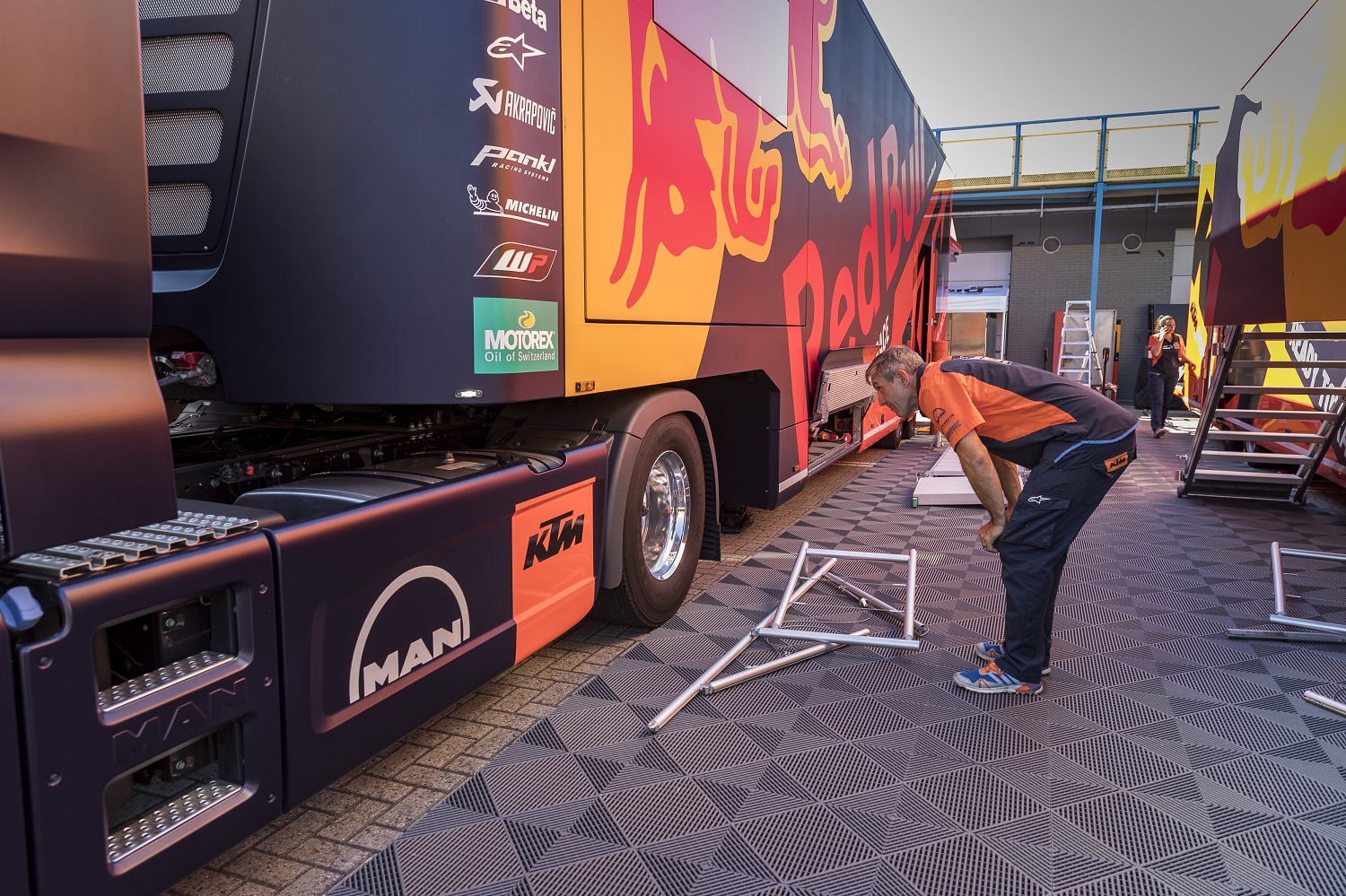 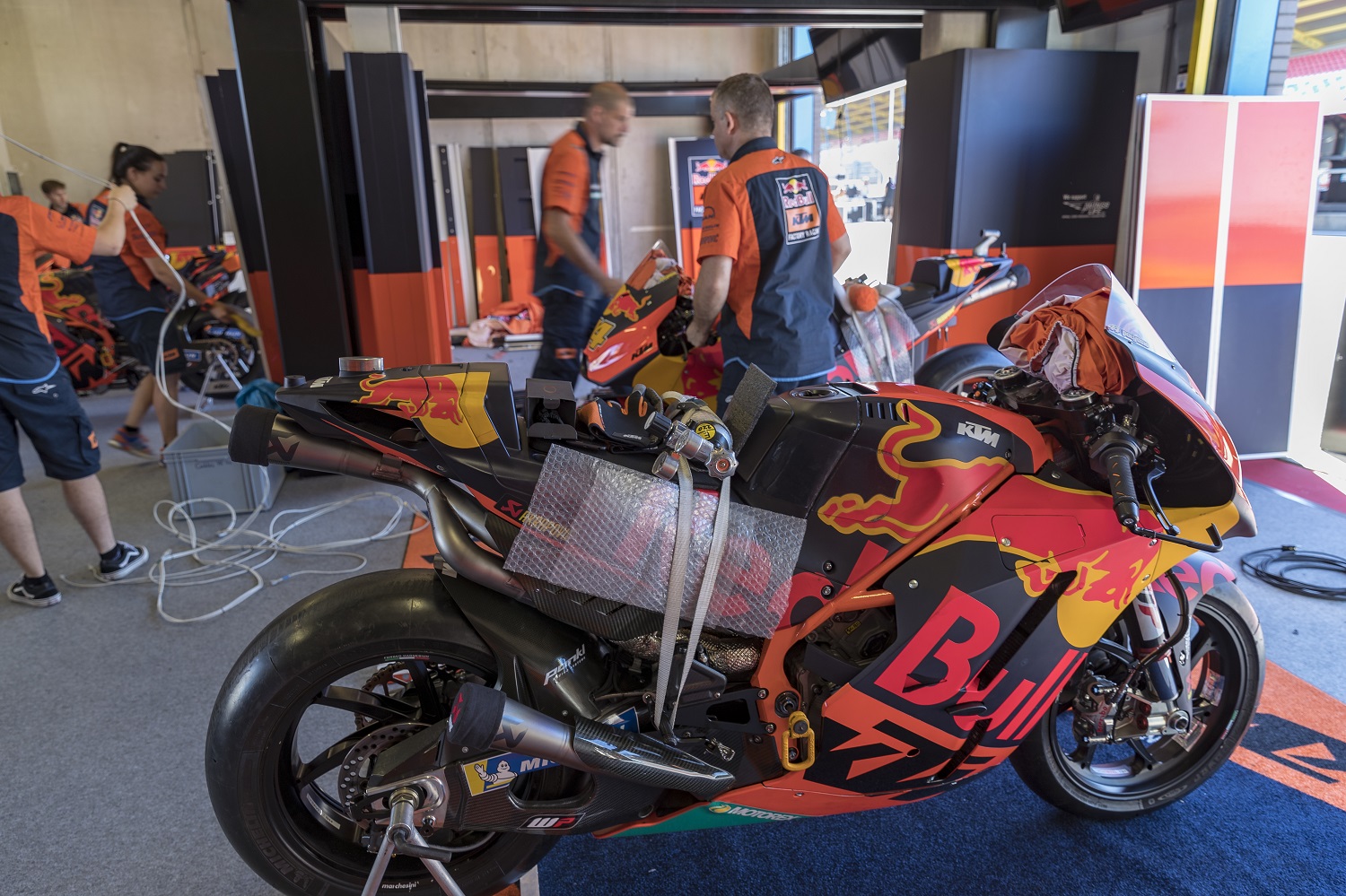 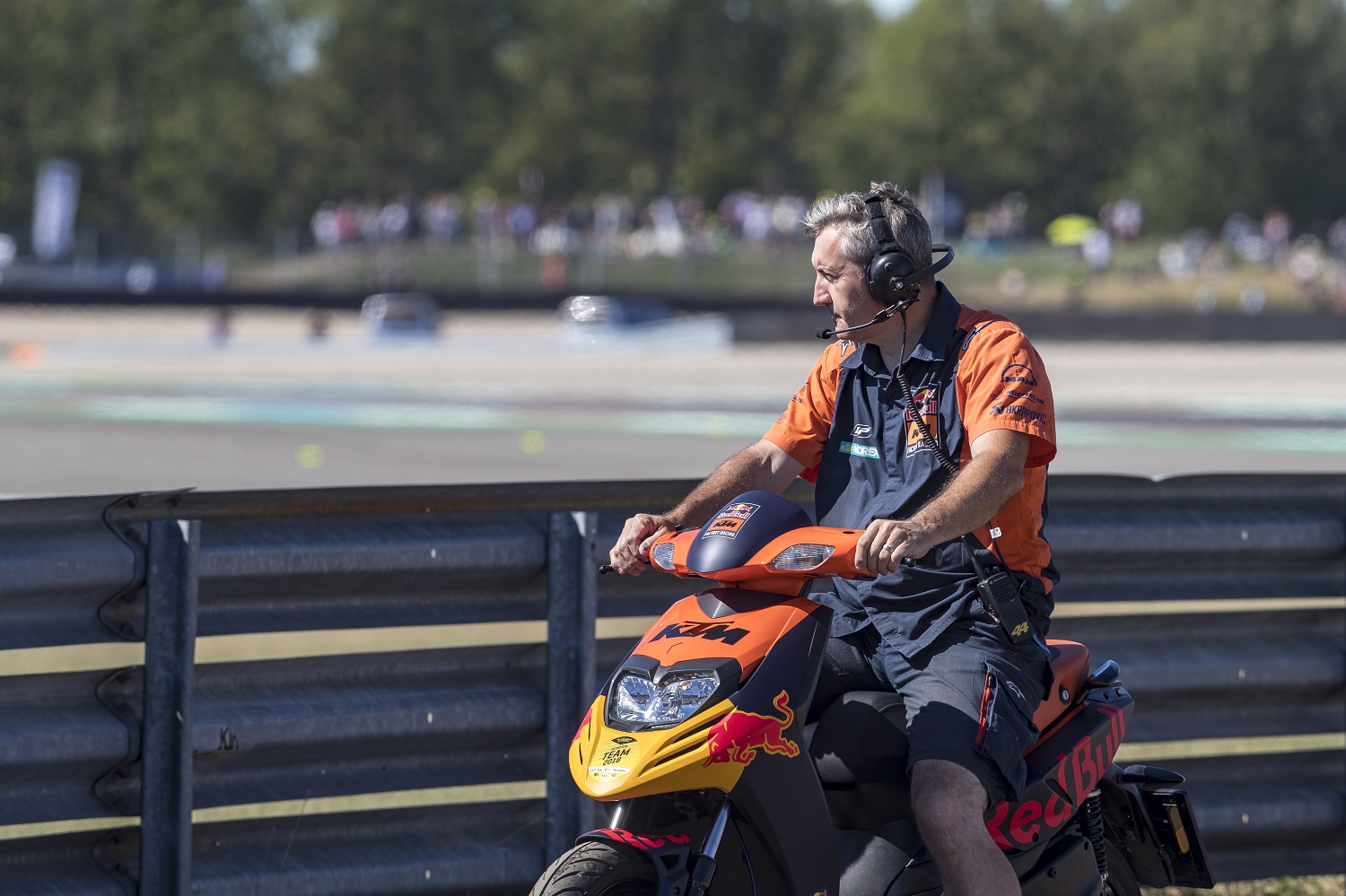 Shipping parts
On Sunday evening, when all the racing is over, the team has to start loading everything back into the trucks. The trucks hardly ever go back to the headquarters in Munderfing, Austria. They go to a depot at a strategic location to save time and money. The logistical operation takes up a big chunk of a MotoGPTM team’s budget. Wilson: “I think something like 40% of the total expenditure goes on transportation for the team.” That is why Wilson tries to make sure all the gear is moved around as efficiently as possible. The key is to eliminate unnecessary travel. “It can take up to three days to drive from Barcelona back to our base in Austria. And by the time you get there, it’s already time to leave for the next GP. So, it doesn’t make any sense really. If we have an emergency and we need to get certain parts from head office, then we just call DHL. They will deliver it to the circuit for us.” This type of efficient planning means Wilson only has to drive around 35,000 km a year, even though he has to go to twelve different Grand Prix circuits spread out across the whole of Europe. “By taking the trucks to strategic locations, we have managed to reduce the amount of driving to an acceptable limit.”

Races outside of Europe, on the other hand, bring a completely different set of challenges, because then everything has to be sent by air. For the current series of races (Thailand, Japan, Australia and Malaysia), everything had to be boxed up in crates after the GP in Aragon. In addition, all the import and export documents (so-called “carnets”) had to be labelled the right way, otherwise the crates wouldn’t be allowed through customs. Because DHL handles all of KTM’s transportation for overseas GPs, they help Wilson out with a lot of the paperwork. However, sending everything by air is very expensive, which is why Dorna helps the teams by paying towards some of the costs. “The Grand Prix in Argentina costs the most, because you have to pay € 9 per kilo for airfreight. Normally you only have to pay € 4 to € 5.5 per kilo. And when you have to send 15,700 kilos of gear to Argentina … then you’re talking about a considerable amount of money. To make it affordable for the teams, Dorna covers some of the costs. For the top-10 teams in the MotoGPTM championship, Dorna pays for the first 11,000 kg, and the team has to pay for anything over that. We are not in the top-10 right now, so they only pay for the first 9,000 kg.”

In light of these enormous costs, KTM is currently exploring new ways to reduce the cost of Grand Prix weekends overseas. “For example, shipping by sea is a lot cheaper than shipping by air, but of course it takes a lot longer to get there … However, if you have two sets of all the gear, then you can rotate. That way you can use one set while the other set is being shipped to the next circuit. At the beginning of the season, for example, while one set is being used for testing in Malaysia, the other set can be shipped to Qatar. And while the Grand Prix in Qatar is taking place, the set in Malaysia can be shipped to Austin. It’s a strategy they use in Formula 1, and Suzuki do it in MotoGPTM as well. But the initial outlay is enormous: two of everything costs a lot of money. In the long term, though, it makes your logistics a lot cheaper. So, we might switch to this system at some time in the future.” 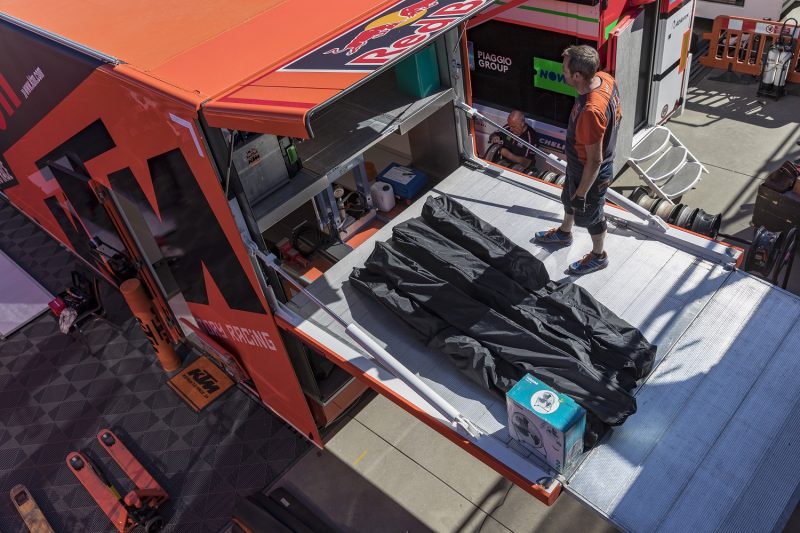 Extreme case
The overseas races are a logistical challenge in other ways too as the team has less control over the logistics. “Say you need a certain part in a rush, then you just prey the company delivers on time. Luckily, we have very reliable partners. If they send me an email telling me the part is on its way, then it usually is. But if it doesn’t get there by race time, then I’m the one left with a problem. And it’s a lot harder to come up with an alternative solution at the last moment when you’re overseas. So all-in-all, it can be a real nightmare.”

Luckily, up until now, there haven’t been any major transportation disasters for Wilson. But there are plenty of examples to show just how important logistics can be for the success of the Red Bull KTM MotoGP team. Last year, for example, after a successful test with KTM´s test rider Mika Kallio the latest version of the RC16 engine had to be sent to the next Grand Prix as quickly as possible. “We had two of these engines in Munderfing, but they had to be finished off first. That meant we only had a narrow window get them to Jerez in time for the first European Grand Prix of the season. However, we couldn’t use a normal air cargo service because of the fluids. So, we decided to send the whole lot by private jet. It was ultimately a great decision, because it turned our whole season around. That engine was a real difference-maker.”

Jeremy Wilson obviously feels right at home being a logistics coordinator at KTM. Especially now he has found his dream job working in the MotoGPTM paddock. Although it’s not that surprising when you find out more about Wilson’s background. “My whole life has been about racing. My father started taking me to Grand Prix races when I was a little child, back in the day when Barry Sheene was the king of the road.” It wasn’t long before he became a part of the road race scene himself. He knows every bump and bend on the Isle of Man and the street circuits of Northern Ireland. Even today, Wilson still manages to find time for some road racing. “I’ve got a couple of two-fifties in the shed back home. 2-strokes of course, because they really burn. It’s the most beautiful thing there is. And now that racing has taken me all the way to the world of MotoGPTM Grand Prix, it’s a dream come true. My first job was with Clive Padgett’s team, when Jay Vincent was riding for them. And since then I’ve never left road racing. So, I’m very lucky that I can actually earn a living through racing as well. Although doing this job doesn’t feel like work at all. Quite the opposite, because I get a kick out of just being in the paddock and being able to play a part in the success of the Red Bull KTM MotoGP team.” 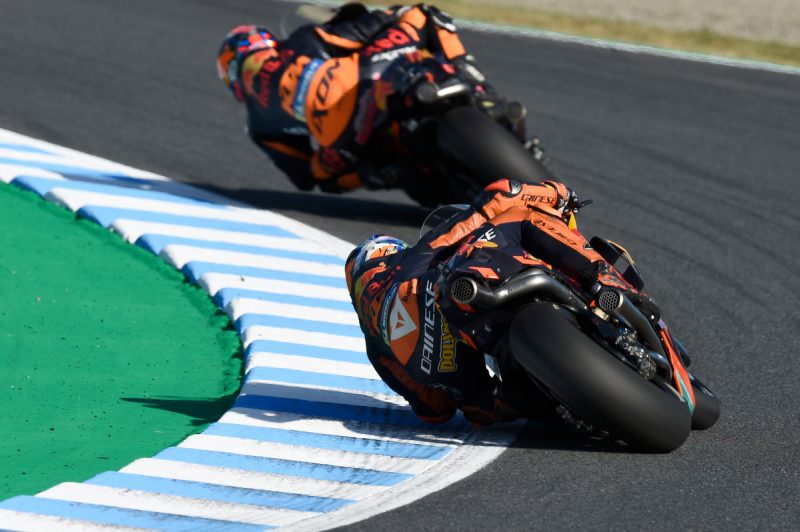 49 Responses to From A to B