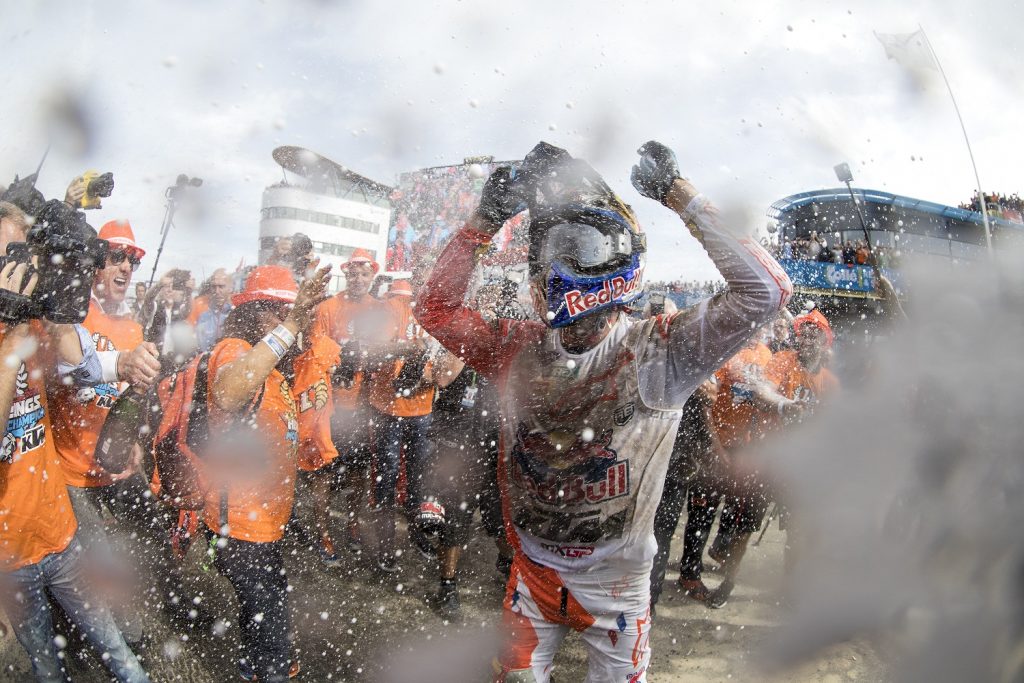 2018 is just four numbers among a thick ledger of other digits for Red Bull KTM’s newest World Champion (and just his second season in the premier class of the FIM Motocross World Championship) Jeffrey Herlings. His first title with the KTM 450 SX-F was secured in Assen last weekend and crowned a season of emphatic achievement; only the training accident that led to collarbone surgery and his absence from round eleven in Italy in June remains the sole blot on a peachy copybook.

Talking about the commitment to defeat the world’s best – including nine times No.1 and teammate Tony Cairoli (runner-up in 2018) – and the effort into construction of a record-breaking campaign Herlings gave us the low-down. 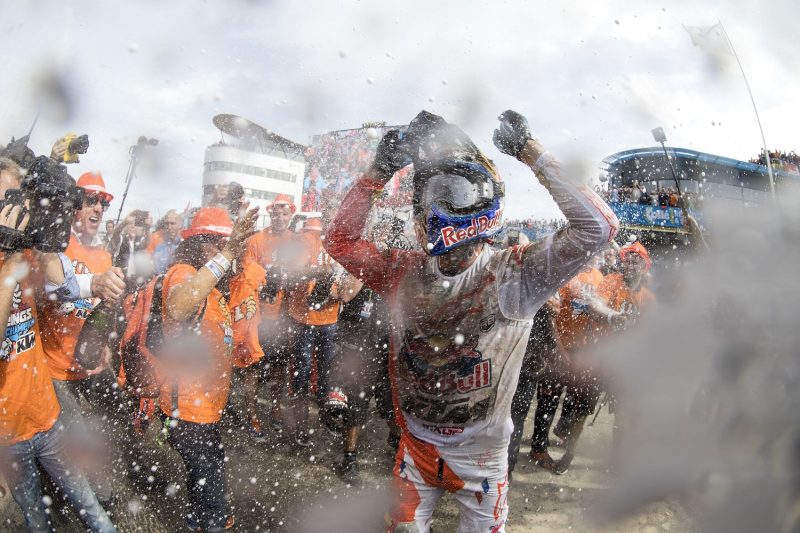 Argentina and the last lap victory by passing Tony: it seemed to set the tone for the season. Did you feel like it was a big statement at the time?
“I came into Argentina with high expectations but I also did not know what to expect. On Saturday I was really nervous. I think I was fastest in Timed Practice but then in the Qualification Heat Tony passed me on the third-fourth lap and I wanted to fight back but went down. I was seventh or eighth and I wasn’t riding well. I had two bad starts on Sunday and things were not really going my way but in that second moto I started picking off riders like Desalle and Van Horebeek and then with seven-eight minutes to go it was only Tony in front of me but with a serious gap. To close that gap to the reigning world champion at the first round was something special. To then take the lead on the last lap was a way of making a statement. I was saying: “I’m here for the big picture”.”

Was that the perfect start? How much did it help your confidence?
“It gave me a boost. Every year you come out of the winter period and you never really know what will happen. Some riders do the Italian championship and some riders look to other races but [the first Grand Prix] is the first time where everything really comes together, and with all the top guys. I think everybody wants to make some sort of statement at the first round. I came home from Argentina and thought ‘Ok, good …’ but also thought ‘nineteen rounds to go, must stay fit, must stay healthy’. Obviously, my confidence grew during the season with more and more wins. It was pretty amazing what we have achieved this year and to win so many motos and overall GPs, despite missing a round, I don’t think many people have done that.”

You’ve only dropped something like 17 points all season, which is incredible …
“Yes, I had a couple of second places and a third but to race 36 motos and win 31 of them is pretty cool.” 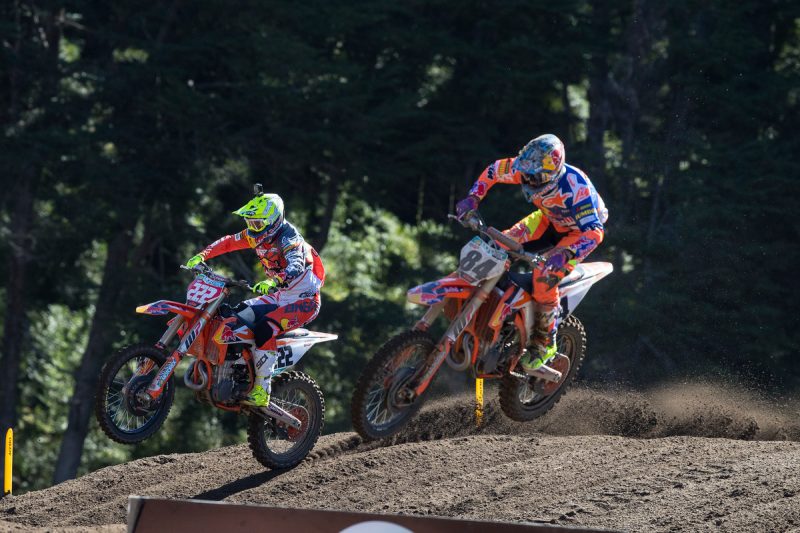 What was the secret to beating a nine times world champion and a force of consistency like Tony Cairoli?
“At the beginning of 2017 I did not take the MXGP class that seriously or behave in the way I should because I was not ‘all-in’ and was still going out with friends and doing things that I should normally be doing at my age! I realized quickly that to win in MXGP you have to go for it 110% and be totally committed to the sport from the moment you wake up until the minute you go to bed for ten months of the year. That’s’ what I did this time. The key to winning was making sure that ‘nothing was left on the table’. I watched out for anything and everything: my food, the training, the travelling, resting, testing. Everything had to click together as well as the people around me. It was necessary to beat a great champion like Tony. We raced 18 times together and I beat him 17 times: I think it is not pure luck any more.”

You said you lived like a “monk” to make the results happen – great quote – but that must carry quite a cost …
“If that’s what it takes to win then I have to do it. It was something I milled since the beginning of last winter. Maybe if I was somewhere in between the commitment of 2018 and 2017 then I could still win but I wanted to make sure I gave the maximum and make sure it was enough to win. I’d rather do that for a short number of years and try to collect titles and win races and GPs instead of going easy for fifteen years and maybe not winning much at all. I prefer to go all-out and shorter.”

It has been a season of dreams, real domination. How can you beat it or muster motivation to go again or try to repeat it?
“As a kid I always wanted to win a premier class world championship. MX2 is a world title … but it is nothing compared to this and what I had to do for it. I felt that in MX2 – especially the last years – people would think “Herlings is here, which means he is either going to win or probably go to the hospital’. This time it was against the hard guys, the heavy-hitters, like Tony, [Tim] Gajser, [Romain] Febvre and those that have been taking titles. I really wanted to beat Tony at his best and I don’t think he was at his best this year but he was close. I’ve seen races from him a few years back and also close-up now and personally I don’t think he has been riding as well as he is now and to beat him straight-up? Pretty cool. I have been studying and watching him for a number of years and I’ve always thought ‘I want to beat that guy …’ and to do it for the championship is something really nice.” 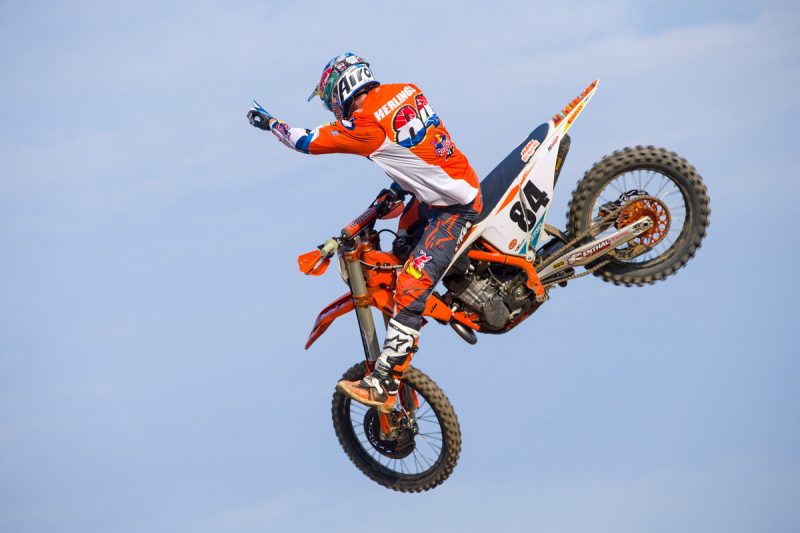 One negative is that you’ve made it look easy, almost like an MX2 campaign. You’ve said repeatedly that the level is so high but it must be tricky to make people believe that …
“Yeah, it is difficult. People might see it like MX2, but if I look back now then MX2 was a bit like for ‘children’ whereas this [MXGP] is like for the big boys. Winning an MX2 championship is still not easy – believe me – there were still some amazing riders there. The level of MX2 might not be the same as it was in the past now, but everybody looks at it in a different way and from their own perspective. I think the MXGP class is one of the ‘heaviest’ it has ever been; there are multiple world champions in the class and a lot of GP winners. Even now there are some top riders who are struggling to find a ride for 2019. It is a very tough class so that’s why you have to go all-out and put all of your heart into it. Some people might see that and some might not but I’m sure that most in the sport and the industry will.”

What about the emotion of a day like Assen?
“When I woke up in the morning I felt ‘today’s the day’ and I had all the flashbacks of getting up and doing the routine: getting on the road bike, going into the gym … all the ten months of hard work and dedication went down to this day when it was most likely going to happen. My mum and I had tears in our eyes this morning. It was definitely emotional and going into the last lap I knew I was world championship because I’d lapped up to 7th-8th and everything went through my head of what we’d done this year and in the past. I was a big fan of Tony back in 2004 and then he won in Lierop I thought ‘one day I want to be like those guys’ and here we are fourteen years later fighting the biggest racers in the world and I have won the biggest championship I could possibly win.” 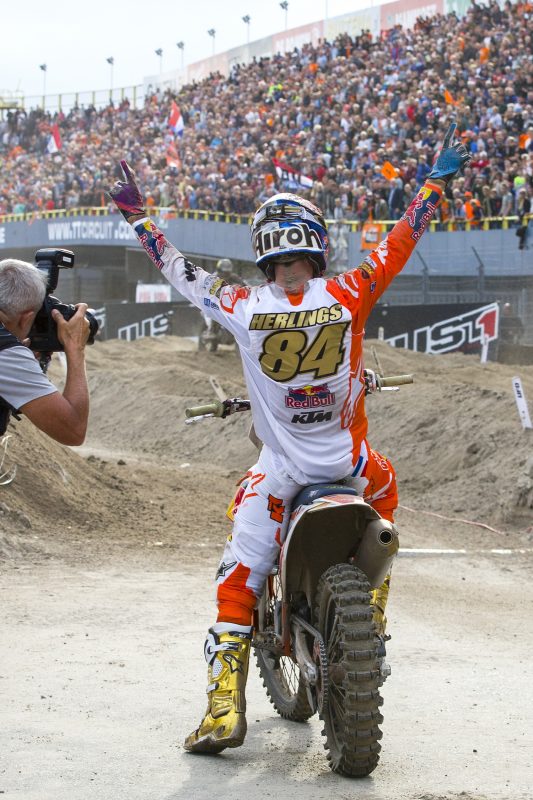 You’ve credited the team and said the KTM 450 SX-F has been almost perfect. Is there much to improve with the bike because you have an unbeatable package at the moment?
“Well, we have some new things [to come] and the competition is always working to get closer. I think they are really pushing to take the crown away from KTM. This year the team will again have MXGP and MX2 championship and the group also took the Supercross title as well as the 250 West. I think the other manufacturers are looking and trying to stand up to beat us. We have to improve. If we stop development then we won’t be number one any more. We have things to test: something on the engine and also with the chassis to keeping working and to try to be better. Up until now the package has been really good … but if you look at the bikes ten years ago then they were great but compared to now they are pretty crappy! Our 2018 bike is awesome now but again in ten years it will be something that’s not good enough. Development never stops.”

How will you treat yourself in the coming weeks and do you have any other ambitions?
“The plan after the Motocross of Nations is to not ride for about six weeks: I asked for some time off! Obviously, there are still some [promo] things I need to do but that’s my job and I love to do them as part of the marketing but I asked not to ride the bike for a few weeks and finally be able to hang out with some friends and have a holiday. Even small things like when friends go out for fast food and I have to have a salad: scrap that! I want to enjoy a little bit of being a normal 24-year-old kid. We have to make a lot of sacrifices [as a rider] and that’s what I do to try and win. KTM are really supportive of that; they see how hard I have worked and understand wanting a few weeks away from it. I think it is also necessary: I have to recharge the battery if I want to win next year and do it all over again. I don’t really have any burning challenge away from the bike. I just want that normality that I have to avoid during the year! Halfway through November we’ll start the preparation for next year.”

165 Responses to Interview of the Month: The words of a master – Herlings talks mammoth 2018