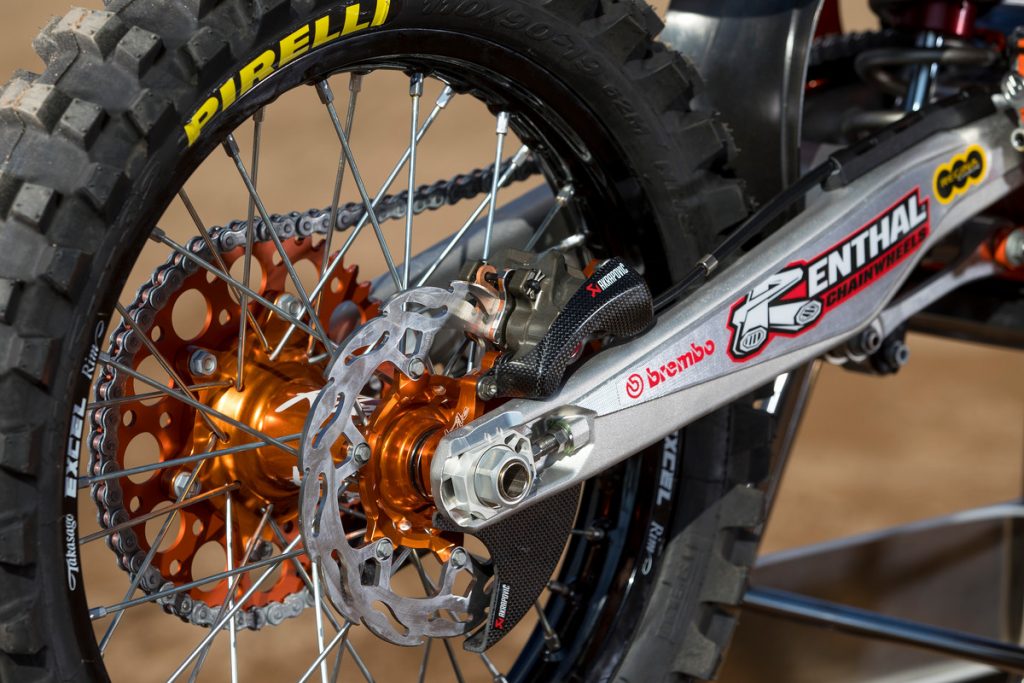 5 things you might not have known about tires & MXGP

Italian brand Pirelli is dominant in the FIM Motocross World Championship with almost 70 titles in all categories. How and why are they so successful and what goes into their MXGP program? We asked the official supplier to the Red Bull KTM Factory Racing Team … 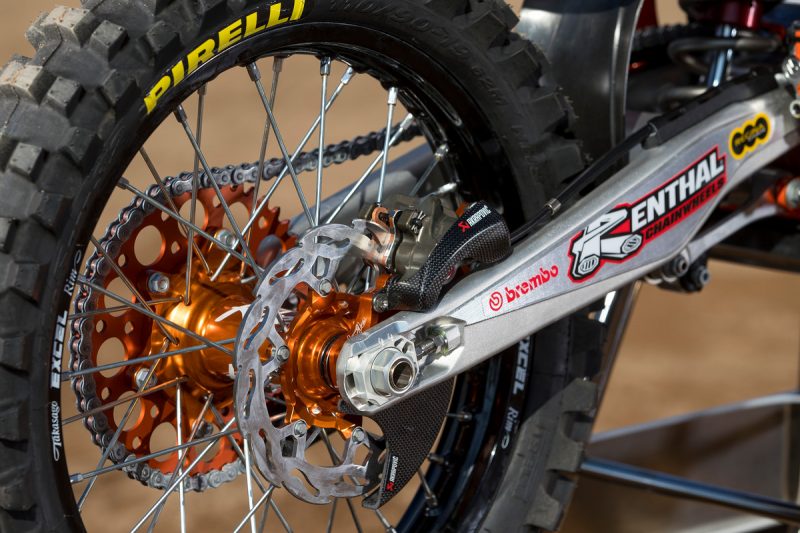 Pirelli’s MX Race Service Manager, Roberto Pasquale Sanzone, has been working for the company for twenty years and through various racing disciplines in both cars and bikes. For the last five he has been in charge of motocross and has headed the introduction of the new ‘MX Soft’ product into MXGP; seemingly the tire of choice for most of the Red Bull KTM crew. The Austrian factory team is a high-profile sect of the twenty riders Pirelli have in the FIM Motocross World Championship and thanks to this alliance have banked a wealth of victories, podiums and titles since the beginning of the decade.

In MotoGPTM Michelin’s efforts form the foundation of every single Grand Prix. The performance of the slick or rain tires is crucial to the sport and even the integrity of the series: in more ways than one the tires are the ‘root’ of the racing. 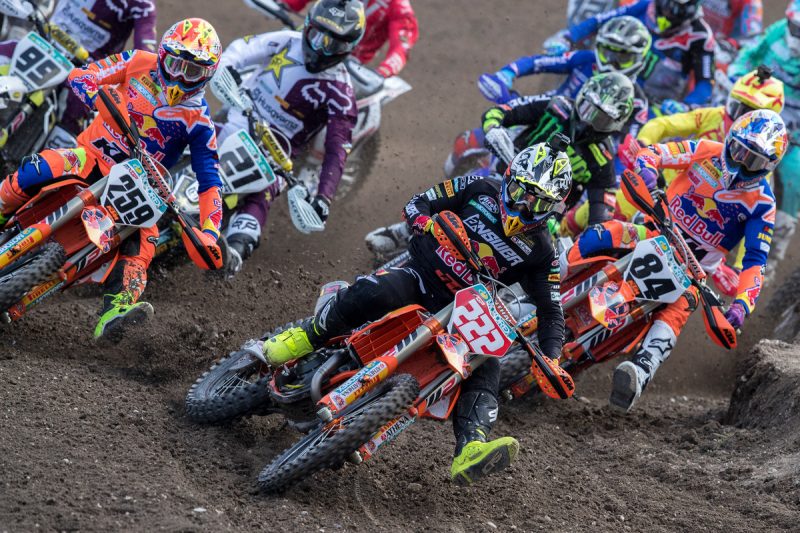 The diversity of terrain and the climate conditions on any given day in MXGP means that grip and traction is paramount but scrutiny of the rubber is not so pronounced. While road racing requires compounds that will function under severe temperatures, weight and abrasion – a terrific amount of force – motocross is almost the same but in a different way: the unrelenting rough ground, the energy on the tread pattern and the hard landings from big jumps. Not to mention necessary efficiency in arguably the most important element of a Grand Prix moto; the start from the metal gate grill.

“The start is the main point in this championship and for the last two years when we have been using the metal grid,” says Pasquale. “Grip and traction is obviously something that every rider wants and we work towards. A strong point for Pirelli in this series is in having all those official riders and we can learn from every single guy. We can get a good average feeling for what a rider and racer will need.” 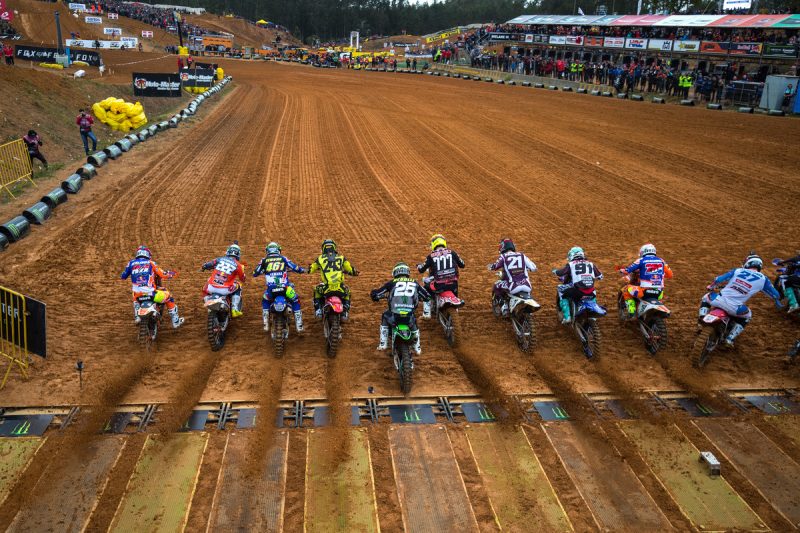 Pirelli and other brands like Dunlop use MXGP extensively as a test-bed for their products. Grand Prix can visit a sandy circuit one week, hard-pack the next, heavy mud and dusty and stony surfaces. The likes of Tony Cairoli and Jeffrey Herlings are also pushing their technical packages to the max. “We listen to all the feedback but finally we also look at the race tire choice,” comments Pasquale. “If the top riders are using the same tire every race and they are winning, setting the best lap-time and taking holeshots then we know that tire can perform! Sometimes the fastest rider can make a wrong decision but ten others might make the right one.”

2. Pirelli have a busy race service at every Grand Prix

The yellow truck is one of the more prominent in the technical supplier section of the paddock. Pirelli’s tire crew is working constantly with teams and mechanics to ensure Grand Prix wheels are correctly fitted and prepped. “We bring about 300-400 tires each race, it depends on the track,” Pasquale says of the racks and racks of black ‘circles’ neatly positioned inside the facility. “We’ll use one race service truck with a crew of 3-4 people. We have to be ready for every possibility and weather condition as well as any rider request, so we bring more or less our whole range.”

“The crew works a lot at the circuit,” he adds. “Every rider likes a different setup such as a different mousse or they have a different method to work, like starting a race with a used tire. Some need a new tire with every gatedrop. It depends on the mentality of the rider but in terms of performance a new or used tire is exactly the same. The mousse is a personal choice and it depends on the condition of the track and the weather. Sometimes we use a mousse that you can consider has 0.8 bar of pressure, sometimes the same rider at the same track will want a 1.3, very different. We try to follow every type of request.”

The nature of the Grand Prix determines how much of the truck contents are used before heading back to the factory. “It depends,” Pasquale says. “If we come from a sand race where the wear is not so high and go to hard-pack like Arco di Trento that is far tougher on the tires. Sometimes we can use 2-300 per GP.” 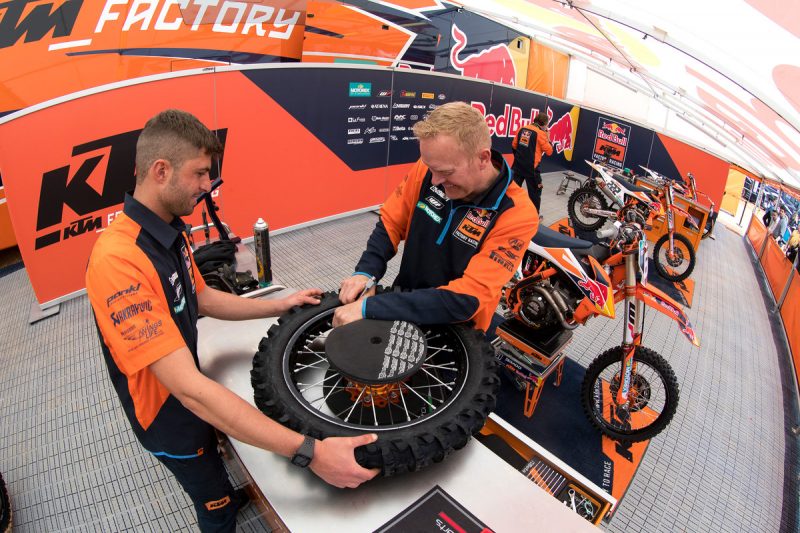 3. Testing doesn’t happen as much as you think

Pasquale emphasizes that “development never stops” but when it comes to testing and analyzing new tires very little happens during the races, infrequently during the year and then only when Pirelli are sure they have a concept that will work.

“We prefer not to change the tire because of some idea that comes up at the weekend,” Pasquale states. “If there is a theory then we prefer to share and discuss back at the company and workshop and we make a clear decision for everybody. We don’t like to experiment much at the races but when we go testing that is another thing and we can try any kind of specification and can invent something.”

One luxury motocross enjoys compared to every other closed-circuit motorcycle sport is the frequency that riders can train and practice with the same machinery. This means that a large chunk of Pirelli’s work and information collection happens away from the pressure and spotlight of a Grand Prix track. Pasquale: “The riders are training almost every day so they can try the tires whenever. So new tires can come around at any time in the year, not necessarily January or December.”

For most people a motocross tire will seem and feel very similar. “If you look at the MX mid-soft 32 it looks the same as a tire that has been used for thirty years!” Pasquale smiles. “But the compound, construction and everything is so different: we are now on a really good level.” This is where the delicate skills and feeling of MXGP professionals comes in handy. “Good sensitivity is not a common trait. From a performance point of view the new MX Soft is not even comparable to the previous tire. We introduced it last year at the Grand Prix of Belgium. Not everybody used it then because it was so new but only after a few weeks and at Assen for the Dutch GP everyone had it.” Grand Prix riders: a special breed. Which leads us into …

Although Pirelli will not swamp a factory rider with a myriad of options – the tire range only has around seven-eight models, some specific to particular terrain – the athletes themselves are not too picky anyway, according to Pasquale. “The riders use the tires and are not too fussy or wasteful. They are professional in this respect and I’m really grateful for that because the level they are pushing is very high and hard.”

“We also think a rider doesn’t really want to change something he knows. Occasionally it can be hard for us to convince them to try a new product because they are so familiar with the old … this is something strange in motocross.”

Tires might not be as crucial to race setup as say suspension, gearing or engine mapping but it is still an essential component. Therefore, it is normal that a satisfied racer will not seek a change that could swing either way in terms of effectiveness. “They usually stick with the same tires. Of course, there might be one rider in the team who has his own ideas but generally they are consistent. I’m really happy in one way because the KTM guys have really embraced our new products – they have that trust in us – and the MX Soft has been popular. That tire is partially a result of the work we have done with them.”

Pirelli’s work is not only carried out with the likes of Cairoli, Herlings, Coldenhoff, Jonass and Prado. “We like to test with all of our riders, sometimes some ‘unofficial’ riders and then also some test riders,” Pasquale reveals. “We use as many types of bike and rider as possible for the test. We don’t want a tire for one specific brand or type of bike.” 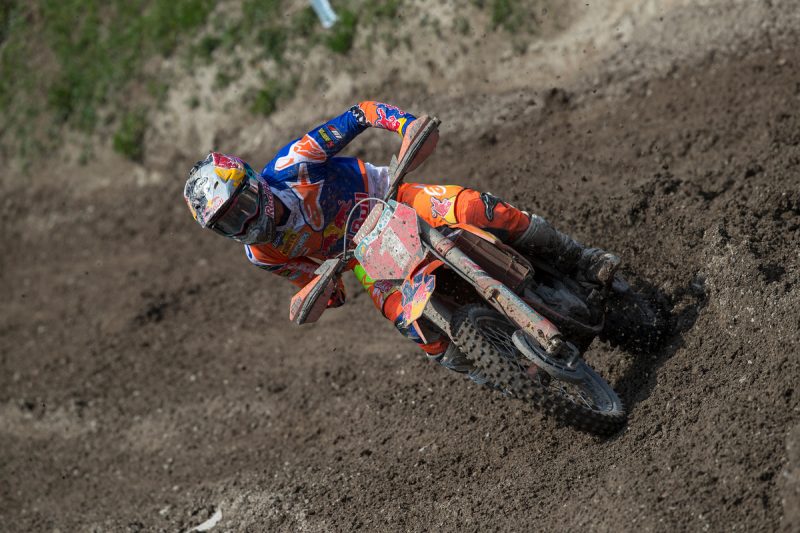 5. There is no such thing as a ‘special’ MX tire. You can use the same as the MXGP stars.

A works KTM 450 SX-F or KTM 250 SX-F might have unique parts and components that the normal rider or KTM fan will never be able to use or buy. In contrast Pirelli’s ‘universal’ approach to their product means a ‘special’ provision for MXGP riders is highly unusual. They will hardly ever hand-cut a tread for a rider. “We have very few ‘special’ tires but when we do we develop it to a point where it will be in the following year’s range to buy: this is our philosophy,” says Pasquale. “We don’t follow one rider we follow the group. We make a product that many will want to use and will easily suit people.”

“Our target is to develop tires that we can sell and not just for racing,” he adds. “Sometimes it is difficult for people to believe the same tire we use in a Grand Prix of the world championship is the same you can buy at a dealer and take home … but it is like this.”