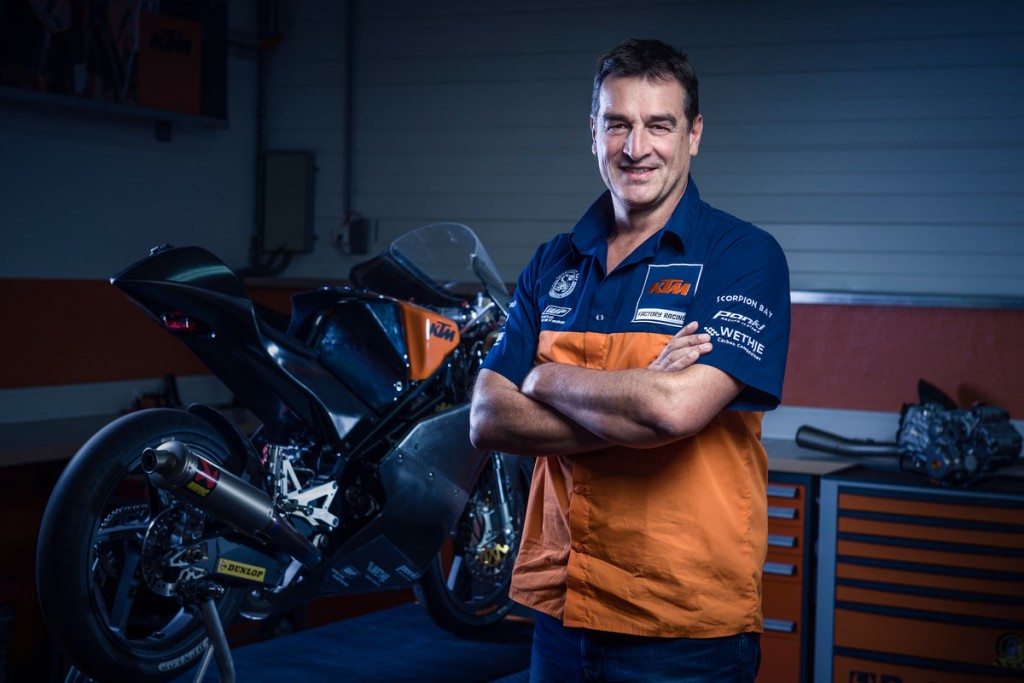 Power is everything. In 2017 KTM makes it full time return to MotoGP with the KTM RC16 and its new grand prix machine will need to pack a persuasive and potent punch in order to fight at the front in the premier class. The KTM BLOG caught up with the project’s Chief Engine Designer, Kurt Trieb, to try and get him to expose some technical secrets of the new powerplant. 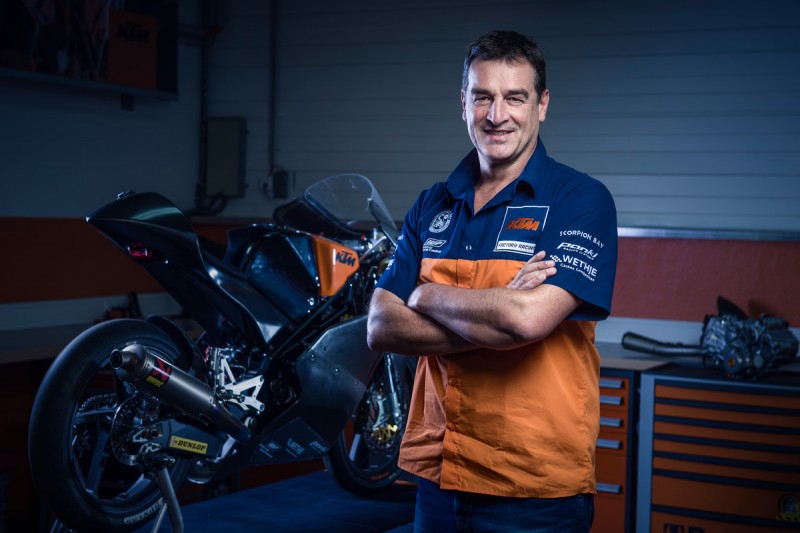 Sat down in KTM’s new Motorsports building, Kurt Trieb is the polar opposite to the RC16’s V4 engine that erupted the ears of those who attended the Austrian GP in August. As opposed to brutal power and a screaming exhaust note that can’t be ignored, German-born Kurt who leads the engine design team that has created KTM’s new MotoGP powerplant, is softly spoken, gentle and not at all an attention seeker.

After studying Mechanical Engineering at the University of Stuttgart for seven years, Kurt worked in engine design for Porsche, Rotax and BMW before becoming a key figure in driving the Motorsport department at KTM since 2003.

The 54-year old is not new to Grand Prix motorcycling, having been the chief designer on the original KTM 990cc MotoGP engine that raced briefly in 2005. Since that time he has helped power KTM’s dominating motocross engines and was responsible for KTM’s potent return to Grand Prix racing in 2012 with the original design of the Moto3 engine that drives the RC 250 GP machine.

So for KTM’s return to MotoGP, was it a case of blowing the dust off the 990cc engine that was used in the Team KR chassis in 2005?
“No, we started from scratch to try and avoid any mistakes we made back in 2005 – that’s clear. But for sure, you have to look at the old design. Anyway, I was very happy to begin such a project again and certainly it helps if you have collected some experience before!”

Were you happy with the first KTM MotoGP engine?
“This was a strong engine which wasn’t given a chance to show its true potential. There were some problems on the original engine, for sure. It was a different time back then; we built the first five engines and then went racing with them. It was a completely crazy situation! Now we have a proper test and development plan.”

Why did KTM decide to go for a V4 again?
“There are many advantages to go for a V4, in engine performance and mechanical reliability. I have experience with inline fours and the problems that come with those, so either way I was at ease with whatever decision was made. An inline four wasn’t considered to be a KTM characteristic. In the end we didn’t really have many discussions about what configuration to go for, but more on the angle of the Vee. A wider angle avoids the need for a balancer shaft. That sort of decision.”

How difficult is it to build a MotoGP engine?
“Difficult! We wouldn’t have the time to discuss it all (laughs). There are some restrictions in building a MotoGP engine. For example, the maximum diameter of the bore is 81mm. It doesn’t make sense to build an engine that can reach 20,000rpm as the valve sizes are too small for this to gain anything. So there’s a natural maximum engine speed that matches with this bore, somewhere between 16,500-18,000rpm. We are in that range, but in addition to that you try to achieve a good power characteristic. For example, the slowest corner in Jerez sees the engine revs go down to 5000rpm. So if you have your maximum power at 17,500rpm for example, you need to consider a wide range of power to suit all tracks. Our first 990 GP engine really only worked above 8000rpm, so this was clearly a problem and something we have moved away from.” 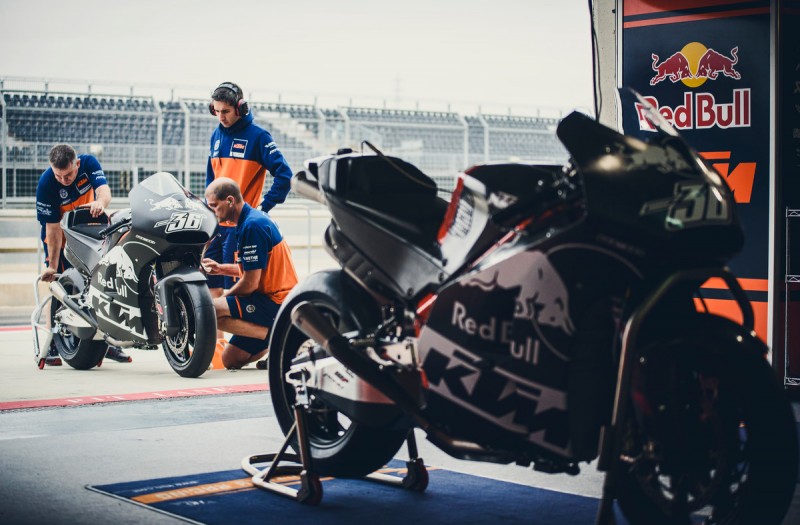 Describe the engine setup of the MotoGP department.
“There are many projects in Factory Racing, but I am responsible for engine design and we are a team of five people. There’s also a bigger team taking care of the development and workshop. But the advantage of having all the projects within Factory Racing is that there are aspects from other projects that can be incorporated into what we do for MotoGP. For example, for Moto3, what we have learned about combustion and valve train configuration can be brought across.”

Will the KTM MotoGP engine help KTM street customers?
“If the technology can be transferred? That’s a difficult question really. If we don’t make a production V4, then maybe very little. KTM has such a wealth of experience with single cylinders, especially being at such a high level with Motocross and Moto3, that this definitely helps other products. It will be very interesting to see how long it takes before we see technology like full seamless transmissions making it to production bikes. It shouldn’t be too difficult. There are double clutch systems existing, they are not easy to manufacturer but it’s the same field of technology with a similar core problem.”

Speaking of Moto3, you were in charge of creating the original engine that has been so successful.
“Yes, but I’m not very much involved in Moto3 anymore, as another group is working on development and following the races. I try to catch up and have an overview what’s going on. Surprisingly – and I don’t mean this disrespectfully – on the engine side we have found a good step for next year. I thought we were quite settled, but we’ve found some very good potential and we are optimistic for 2017. This shows that KTM is still very focused on Moto3 and that by continuing development work we have found a really big step that everyone is excited about for next season.” How about the noise of the RC16 engine?
“We started with some kind of silencers for the roll out, which for the riders was clearly a lot more user friendly and comfortable. But everyone believes it needs to make more noise. Then again, this is just a side note. Maybe the original engine would have damaged my hearing though!”

How much power do you need in a MotoGP engine?
“You see Ducati with the most powerful engine and for instance Yamaha with less, but then Yamaha wins the race. That’s the compromise you have to find and be fast on every track; to set great lap times everywhere and give the rider a good feeling.”

What do the riders say about the RC16’s engine?
“Feedback is good, a little bit too good! There was a bit of a break between tests earlier in the year. Before this Mika (Kallio) said the engine felt very aggressive when he opened the throttle. Since then we made three tests (at Brno, Mugello and Jerez) where he said he felt more comfortable. Is that an improvement in electronics or just Mika becoming more used to the power? I think the riders must feel that there is always sufficient and extra power available when they open the throttle. Coming from past experience, when a rider says an engine feels smooth or is easy to control, it often meant it was slow! And we want to be fast. We must be fast on every track, but still give the rider the best possible feedback. It’s a compromise, but something we have worked hard to achieve.” 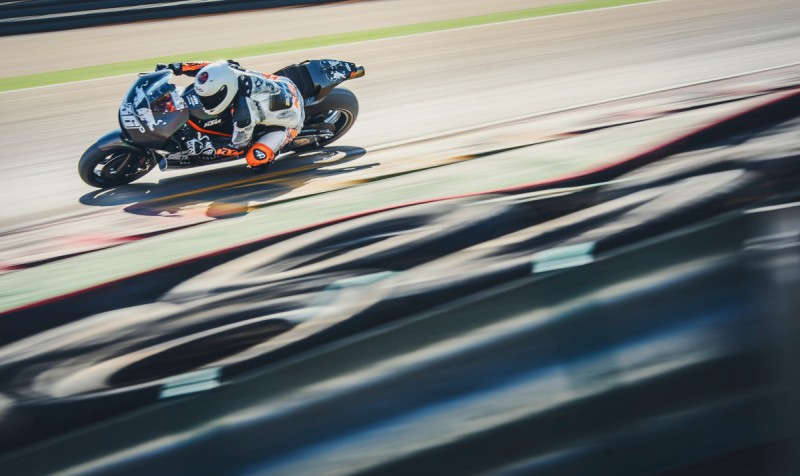