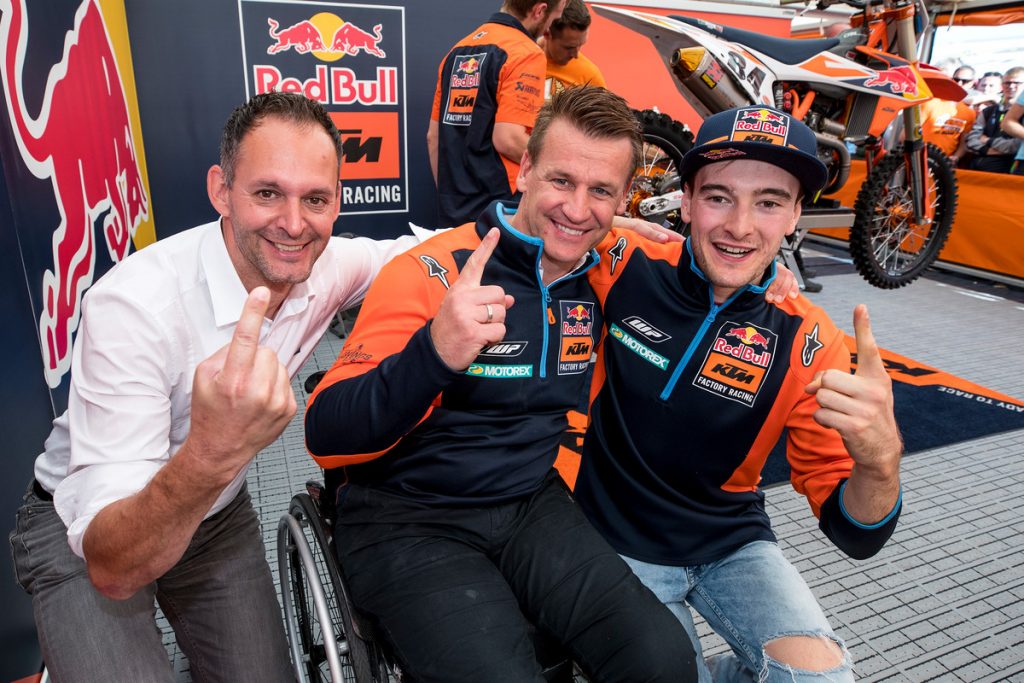 Hangover or hegemony for KTM and their MXGP rule?

Motocross was an orange domain in 2018 as Red Bull KTM completed a historic season of grand prix excellence. We asked VP of Offroad, Robert Jonas, about the aftermath and then the outlook for the summer to come …

Inside the KTM Racing Division building in Munderfing the principal workshop is covered with KTM RC16 MotoGPTM bikes and components. A large-scale amplification of the road racing effort is underway for 2019 and it feels like the HQ is awash with slicks and MotoGPTM technicians and experts. In the corner of the main atrium two MXGP factory dirtbikes sit prone and ready. The KTM 450 SX-Fs works machines may only need a fraction of the technical upkeep and refinement of their MotoGPTM cousins but this racing technology is the undisputed King of a (now crowded) facility that also houses Dakar, Rally and Enduro title-winning pedigree.

In 2018 Red Bull KTM owned MXGP unlike any other team or brand in recent memory. They were 1st and 2nd in both MXGP and MX2 classes and from 20 rounds they harvested 19 and 17 wins in both categories respectively. They appeared on the podium a total 29 times in MX2 and 33 times in MXGP (on 13 occasions Tony Cairoli and Jeffrey Herlings walked the rostrum together, Pauls Jonass and Jorge Prado 9 times in MX2). Glenn Coldenhoff was unbeaten at the Motocross of Nations and the biggest stage for the sport. 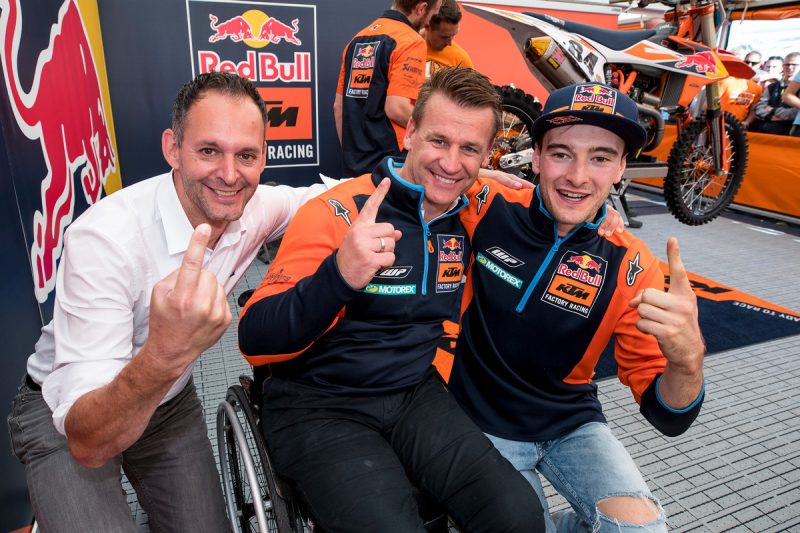 Back in Munderfing and on the first floor the management offices contain the odd shirt, trophy and red plate. VP of Offroad, Robert Jonas, has overseen copious amounts of success through his work alongside Pit Beirer. His workspace could be far shinier and much more cluttered … but the Austrian is conscious of the fickle nature of motorsport: motocross in particular with its keen emphasis on the form, shape and confidence of the athlete.

“The season was so amazing that it is always a joy to talk about it and remember how great it was … but you are also aware that 2019 is a blank piece of paper and everything will soon start again from scratch,” he admitted. “Preparation is full gas to go again and people are already focused. We will be well prepared … but we know the competition will be doing the same.” 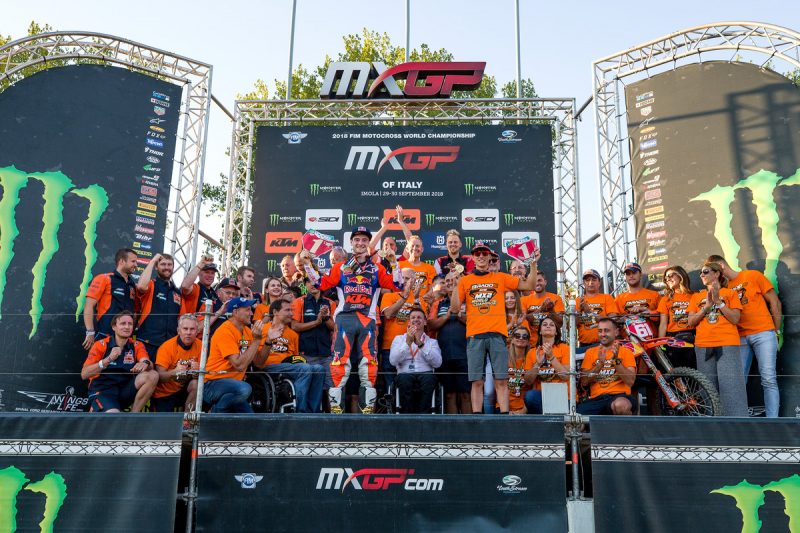 KTM, Jeffrey Herlings and Jorge Prado gathered much praise once the racing season had ended on the first weekend of October but the weight of the numbers had already began to sink in as the silverware kept on arriving on a weekly basis. Relentless victory is a ‘dream-like’ goal, however there is also something surreal about such attainment. “I understand that we cannot take this for granted and I would say we definitely got a bit spoilt this year with so many wins and fights for race wins,” says Jonas, almost forewarning and with both feet firmly planted on the floor under his desk. “We didn’t leave much room for the others and that is something I recognize. It is not the ‘norm’ and we have to do our homework again in order to be in a position to win again.”

‘Homework’ seems to be a key word and there is little doubt that KTM have worked their socks off to chisel the KTM 450 SX-F and KTM 250 SX-F to the wishes of exceptional riders like Herlings, Cairoli, Prado, Jonass; the vast amount of holeshots and advantageous race starts are part testimony to this. “Sure, that’s clear,” Jonas says. “I’m still convinced that we had the best bike in both classes in 2018 and the target is to have that again. The competition will unlikely accept this for long and will try to work as much as they can … but our team is great and we can really see all their effort over the last few years on the racetrack now. It is not only the result that matters because it is also about how good the bike works and how the bike and rider combine on the track. These steps and progress are something almost as good and they are very cool to see. Very satisfying.” 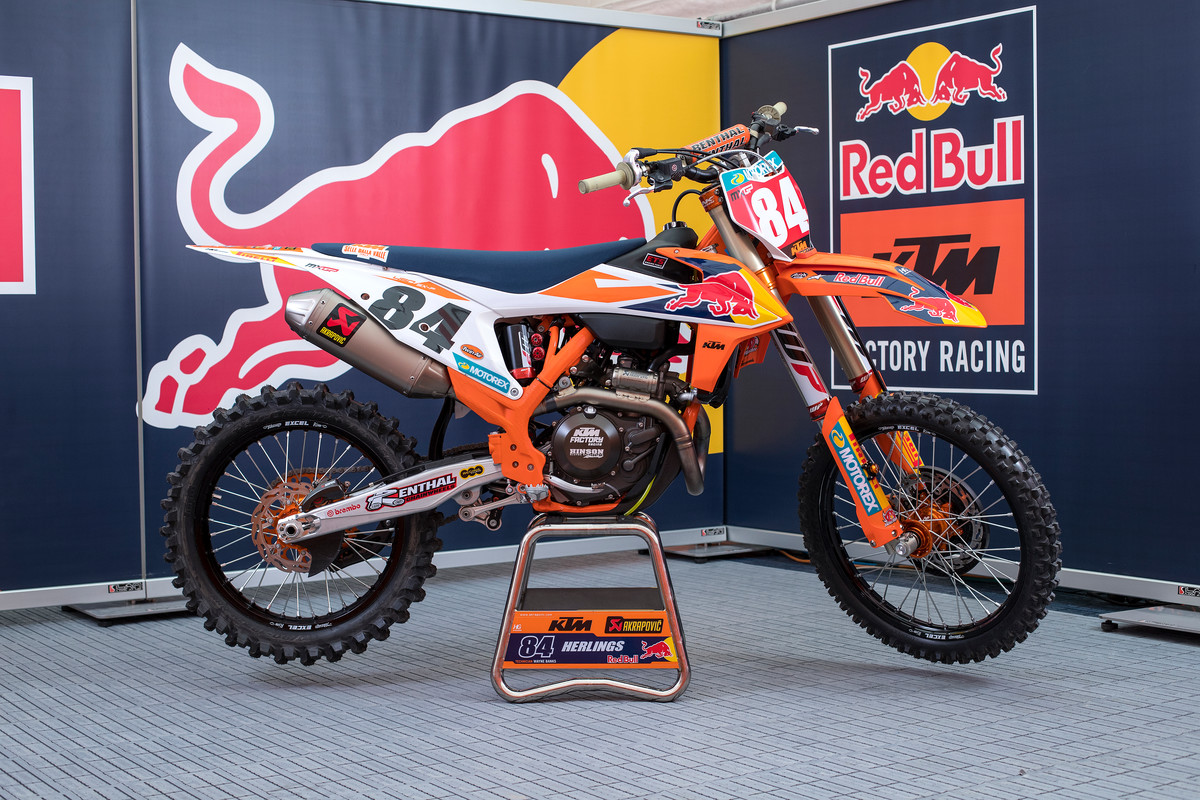 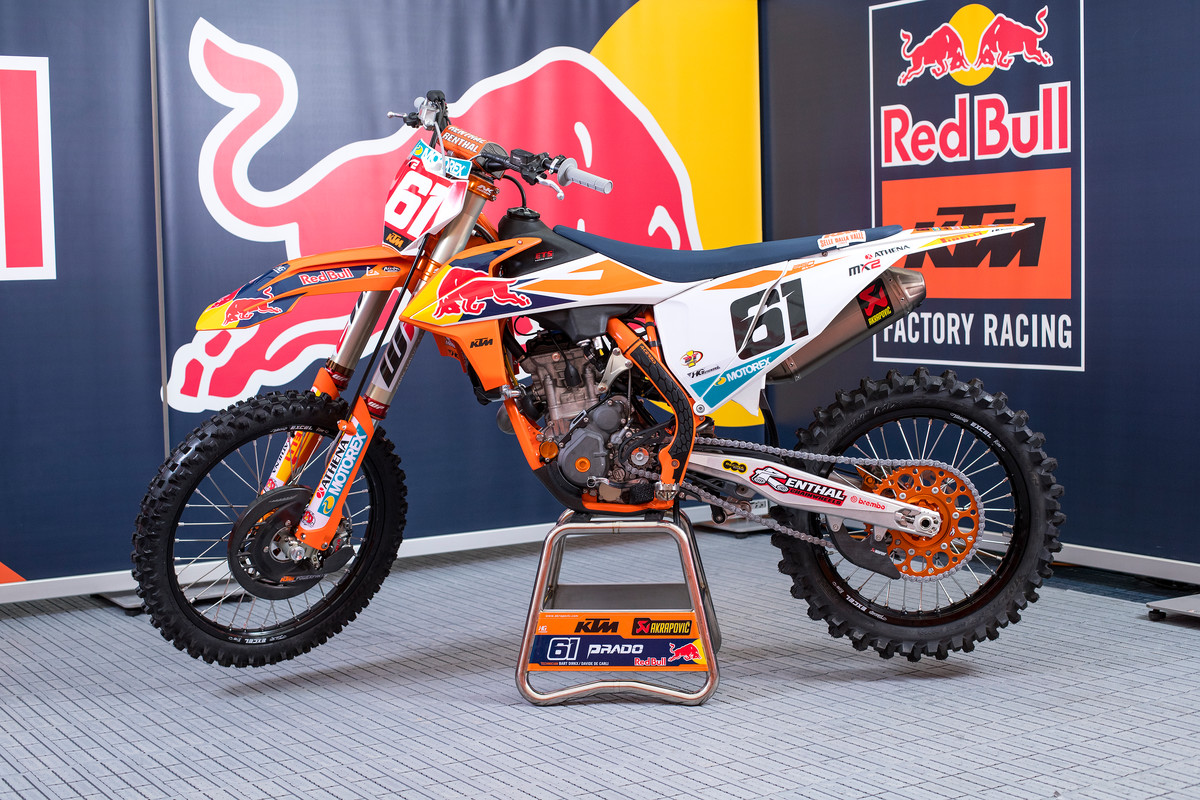 Any casual viewer of MXGP will be aware that Red Bull KTM can call on two of the best racers of the 21st century in the forms of Herlings and Cairoli but such is the unpredictable (and hazardous) state of top-flight motocross that the meld of rider and machine does not automatically equal glory. Especially over nineteen rounds that stretch from Argentina to Asia.

“In 2015 we had Max [Nagl] and Tony fighting for the title and it seemed as though nobody else would get a look in … but in the end it was another rider that won it,” says Jonas with a note of caution. “Currently we have two of the world’s best riders on our bikes and if nothing goes wrong then we are in a very good position – I’m fully aware of that – but it doesn’t take a lot; a little injury here or a problem there and all of a sudden you are not ‘there’. All of our riders have been through this already. An injury at the beginning of the season can change things completely and that’s why a new season is exciting.”

Herlings, Cairoli, Prado and Jonass all had their injury issues at stages of 2018 (Jonas: “Thankfully just little problems, and we have some tough guys who are quickly back on the bike! I think it was better to be in our position and still leading than struggling; that’s when the season feels even longer.”) but there was also another – unusual – facet of adversity: inter-team rivalry. 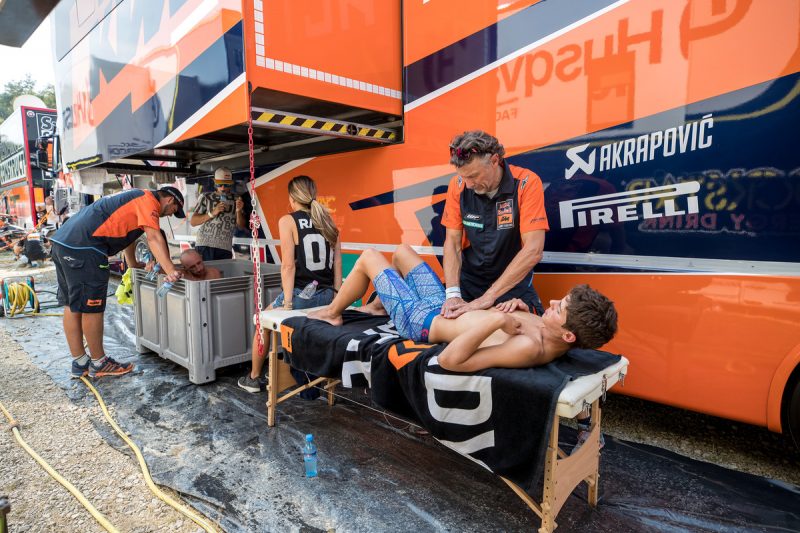 There were memorable clashes among the quartet in Britain and Turkey but the tension of the title battles was largely contained without much drama or controversy and marshalled by team managers Claudio De Carli and Dirk Gruebel. Among all the other gains in 2018 this was another source of pride.

“Yes, things went quite smoothly,” Jonas says, raising his eyebrows both with surprise and admiration. “With Prado heading over to work with De Carli it turned into something that we did not expect to go so well. I mean, we hoped it would! And we were convinced that Claudio would help Jorge with that last little step. They did a great job. I’m really happy we made that move.”

“In MXGP the biggest challenge was at the start of the season and how we’d control the competition between those two guys in the team,” he adds. “Honestly, we thought it would be very difficult, and in the end – with a rider’s perspective and with a few small exceptions in some interviews where one was complaining about the other – it was very professionally handled by both. It was very fair and I really hope it continues in the same way next year because they handled it so well. There weren’t always easy moments, for both of them, but we’re proud of how Claudio and Dirk managed the whole situation.” 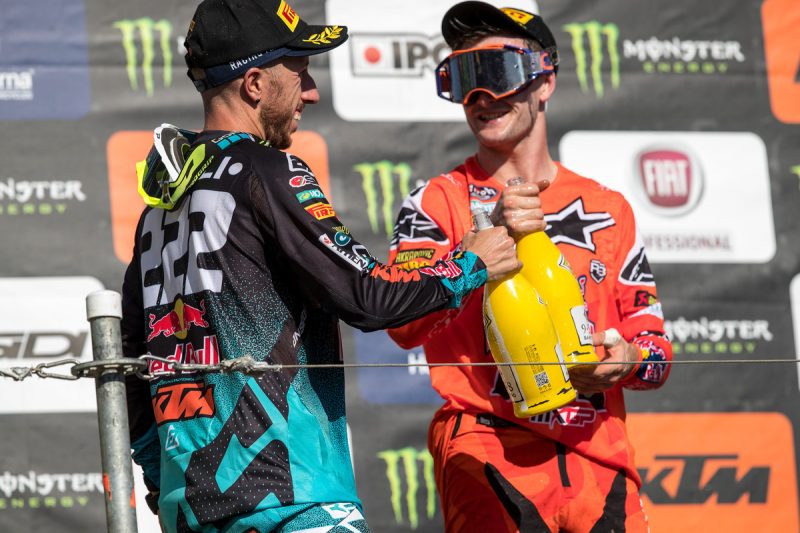 In the month of January tracks in Spain and Sardinia will be pounded by the four-man crew (Jonass shifting across to Husqvarna to attempt MXGP with rookie Tom Vialle taking his MX2 berth) as KTM look to go at MXGP again. Jonas, as a former racer and well-versed in the swinging fortunes of the sport, has already warned against complacency but this might be a tougher sell throughout the rest of the company and perhaps all the fans that witnessed the wave of spoils in 2018. “MXGP definitely matters for the company and is respected a lot,” he counters. “Of course, we have been dominating the championship and it makes it look a little ‘easy’ to some people but it is not devalued against something like MotoGPTM. I think it is still very much appreciated that we do so well in offroad.”

It would be remiss to let the head of the MXGP operation escape without directing the question that will fill pre-season build-up before the opening round in Argentina on March 2-3: can Tony Cairoli match Jeffrey Herlings? Maybe aim for that record-equaling tenth crown? “Never, ever, underestimate Tony: that’s my opinion,” Jonas smiles. “I think Jeffrey is fully aware of that. I think he respects Tony a lot. In the end we could be in the same position as last year but I don’t really know what to expect. I just know that both will give 100% and Tony will go into it with full motivation. I really think he will try for it again. It won’t be easy for either rider.”

Red Bull KTM will be fortunate to scourge MXGP with the same intensity as 2018 but the series will undoubtedly feel a bright splash of orange in the months to come. 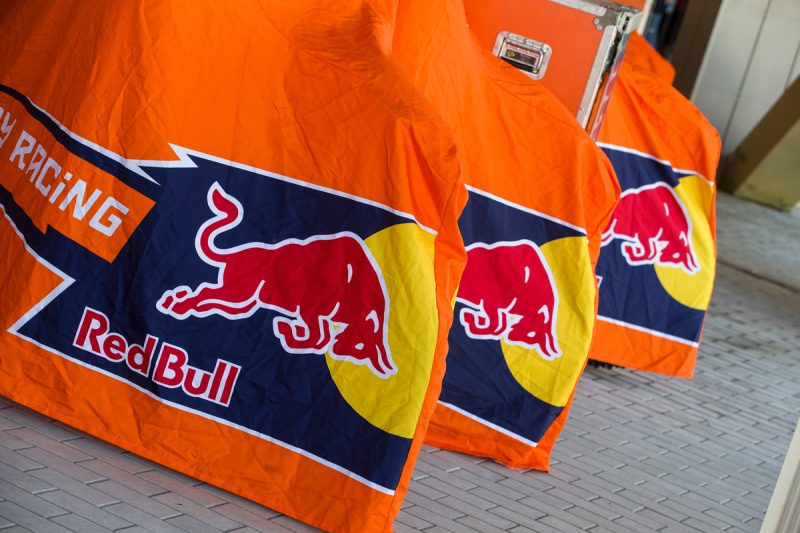 69 Responses to Repeating the unrepeatable? MXGP 2019